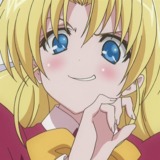 I am not Argeist, he just made this account for me. 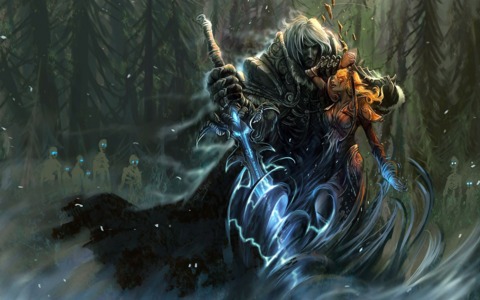 "For so long I held absolute power, no one dare challenge a being they thought as GOD!"

"My Kingdom is prosperous and the envy of others. Our prosperity ignites the fear and jealousy of others. Then they came out of nowhere, people calling themselves servants of the true God. By brainwashing the masses to turn against me and destroying the pillars of order I carefully established. They, with all arrogance, call themselves heroes and I was branded a Demon."

"My own people cursed my name, all is taken from me. So they call me a Demon.....and one I shall become. From now on King Arhas is no more and one day I will be back to claim what is rightfully my own. From this day forth I will be......"

A Cursed Sword given by a malevolent being to a despairing Arhas, later to be known as the Clown Prince of Darkness Jokergeist. The sword's original name was Frozen Popsicle Surprise but Argeist renamed it into Frost Bringer after beating some sense into Jokergeist.

A Geist Ray is a standard equipment issued to the Geist Army. Argeist's gun evolved to fit his power level and personality. Argeist rarely use this gun and if he ever did use it, it is used to clear large amount of foes. The Darkness Geist Ray has the following abilities:

Once the armor called "Light Defender", it is warped by the darkness within Argeist changing its Holy Property and Abilities into a much darker and sinister affinity. Despite its bulky appearance, it is surprisingly light, Argeist even commented that it feels like he is wearing nothing.Fallen Covenant give Argeist the following abilities:

Powers and Abilities (Base Form)

King Arhas is the sovereign of the Kingdom of Exelia. The King is blessed with the gift of wisdom, strength, benevolence, and somewhat long life. Before the dreaded incident occur he is thought to be 380 years but still looks as if he is at his prime.

Being blessed with wisdom and long life, King Arhas made Exelia, once a backwater kingdom prosper to be the worlds most powerful economic and military power. Nations cower at the mention of its name. But as they say, no utopia could last forever. People are naturally greedy and seek power. The King being somewhat immortal is despised by High Ranking Public Officials and some of his Kin not because of how he run the kingdom but on how they cannot be the ruler.

One day the Church of Everlasting Life, the oldest and largest religious organization in the world came to Exelia demanding the King to submit to the Church and tell his people to do the same. The Church of Everlasting Life and the Kingdom of Exelia has always been on neutral position but recently, the newly appointed Pope, Roguelous Shroud, took a more aggressive stance. He unified various kingdoms who have vested interest in Exelia's wealth and those who are coheres whose kingdom be branded as heretic. Pope Roguelous also seek the aid of power hungry officials of Exelia to his cause.

They tried numerous times to topple Arhas but each time they fail. Until Roguelous found something even Arhas does not know, he is not the son of the f ormer King but a love child between the Queen Mother and an unknown Angel which explains his longevity and superhuman capabilities. From this Roguelous started his dark machinations, He began a massive propaganda telling the people that Arhas is not the rightful King and the son of not an angel but a Demon. Soon King Arhas slowly loses support until one day lost all. With his abilities, he can still regain what he have lost but defers from doing so because he believes his people and will not raise his hand on them.

He exiled himself hoping one day his people will see their wrong. He disappeared for 3 years to see if they can manage on their own. During his self exile, he heard disturbing news about Exelia so he decided to see for himself. What he see leaves him in a state of shock, the once prosperous Kingdom is in ruin. Exelia's rich fields are now a desolate waste land, his people corrupted, and laws do not exist. Arhas hurried to the Castle and see his once trusted High Minister sitting on the thrown doing shameful acts to an under aged girl. His anger rises and struck the fiend of his thrown and ask him in a harsh menacing voice what happened. The Minister still laying on the ground starts laughing manically and sprouted the words "It's your fault". Disgusted, he left the Castle.

He traveled across the kingdom and everywhere his citizens are blaming him for leaving when in fact it is they who made him leave. The final blow to his resolve is when he saw parents selling their children happily and hearing from the Slave Trader that Pope Rougelous planned it all because he wants Exalia's wealth and now that he had it leave Exalia to its current state.

Arhas left Exalia though distraught, he is still thinking of a way to save his people. He returned to Exalia to gather support to claim back the kingdom but was refused and mocked by the people he holds so dear.

Heart broken, he journeyed far to recollect his thoughts then he appears. A being shrouded in darkness laughing at him mockingly, Arhas ask who he was but his answer are absurd and trivial. Never revealing his identity, Arhas just named him Dark Traveler, he travels with Arhas, often taunting him of his inability. One day, Arhas patience snap and he confronted the Dark Traveler to stop his erratic behavior he just stood there laughing. Never did Arhas met such an obnoxious person before his restraint left him and fired a bolt of light in his hand that could knock-out the strongest warrior. To his disbelief, the blast goes through him. The feeling of disbelief was replaced by a feeling of release. He often have to hold his emotion in check for his power is great and a mere gesture of annoyance can lead to disaster. Blasting the Dark Traveler gave him a warped feeling of freedom that he had never felt before. While trying to understand himself, the Dark Traveler suddenly vanished from where he stands and appears besides him. "So...How does it feel?" the Dark Traveler asked with a noticeable grin on his shrouded face. "I..I..it feels so vexing......I'm sorry for my loss of control but..... " Arhas answered still confused.

Transformation is another word for Corruption

A month has pass, his goal seems forgotten, Arhas continues to ponder the events that occur, on how each day he noticed strange changes inside him. One day, they came across a village terrorized by an ancient dragon called "Fire Brand", the avatar of fire. He took pity in the villager's plight and inquired on how he can be of any help. The Village Chief receives him to his house and offers his gratitude and said there is nothing to be done because the opponent is a deity itself. Feeling sorry for them he was about to offer his help the Dark Traveler spoke, "Do they remind you yourself. You have the power to do something yet refused to raise your fist". Arhas is about to retort the Traveler's remark when a mighty roar pierced suddenly echoes threatening to rip the heavens from where it stands.

The dragon landed regally on the village entrance, its appearance menacing, its presence can make the bravest warrior cower in fear. With its mighty voice it declared with all authorithy "WHERE IS MY TRIBUTE?". The Village Chief approaches the Dragon though afraid but still collected. "Mighty Fire Brand, we have nothing more to offer, we have gave you everything we have" he said. "That does not matter, when I ask for something give it!" the dragon replied back. "We really have nothing, in all honesty, let to give Lord Fire Brand." the Village Chief replied, his terror now showing. "Then I have no use for you and your village, might as well turn you all to ashes!"

As the Dragon opens it mouth, one can feel the overwhelming pressure of heat affecting the surrounding. Combustible materials suddenly are engulf in fire, the Dragon's attack is not yet released yet the village is in blaze. The Dragon is about to deliver the finishing blow when a bolt of light hit the Dragon on the head and almost fell to its side. As the Dragon regain composure he screamed "WHO DARE?!?"