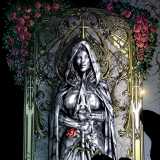 The Scarlet Order and Mother Mary

Documents unearthed by Jean Luc Sr, the father of Gambler, revealed one of the World's greatest historical finds when he stumbled upon the fabled scrolls of the Scarlet Order. A clandestine group of esoteric warrior Monks and religious clerics devoted to a stringent code of honor who's formation pre-dating the birth of Christ. Living relatively humble lives the Order secretly amassed great wealth and religious power while striving to create a better World for their fellow man. Endowed with somewhat mystical abilities, the Order's carefully selected members were methodically trained from infancy in some of the deadliest and earliest known forms of hand to hand combat and swordsmanship. Even creating their own refined versions of what would later be known as the Martial Arts. With unwavering dedication the Order operated unimpeded for years. Battling injustice and the agents of evil throughout the known World. When the Order learned of a prophecy foretelling the miracle birth of a would be messiah they immediately dispatched the Magi. Three distinguished foreign aristocrats who were amongst the most skilled in the Order. They journeyed to Nazareth to meet with the would be mother of the messiah to help prepare her for the coming challenges ahead. They trained the woman who would one day be known as the Virgin Mary in the arts of the Order in preparation for the trails she and her family would one day face.

Consecrated as an honorary member of the Scarlet Order, Mother Mary vigilantly defended her son through adulthood. Until the day he was ultimately betrayed, and convicted of sedition against the Roman Empire. An event that would have catastrophic repercussions for the Order. As Mary spiraled into a pit of soulless darkness. Proclaiming vendetta against all those responsible for her son's crucifixion including the Scarlet Order. She set upon a path of vengeance starting with Allister Augustine, the Roman architect who built the cross in which he son's body was hung. Systematically she swept through the Roman Empire unleashing her unrivaled furry acting as judge, jury, and executioner. When word spread of the mysterious deaths the Order dispatched their agents in an attempt to reach out to Mary and stop the perversion of their teachings. But when she rebelled, the Order was left with little choice. A secret war was waged, which turned members of the Order against one another as lines were drawn and affiliations pledged. Those loyal to Mother Mary formed a new, rogue sect of the Scarlet Order. Outnumbered as they may have been, Mary's embrace of a darker nature and pure unmitigated hate gave her band of exiles a strength the Order had never encountered before.

The personification of puissance (power) within the Order is reigned over by the Court of Owls. Skillfully ranking amongst the apex of elite assassins these men and women are devoted to the art of combat and sophisticated enough to engage in the political arenas of the most treacherous nature.