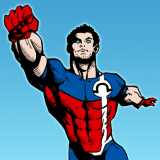 @dondave: Mmmmh, depowering Superman to tell a good story seems to be a common re-occurrence...

When last was he depowered?

Up, Up and Away by Geoff Johns shortly after Infinite Crisis.

You do know in up up and away Superman had no powers at all, this one he still retains some super strength and invulnerability. He can't fly has no x-ray vision or heat vision.

To answer this battle I don't know too much about Manowar but this version of superman couldn't take down mecha Batman so it might go to manowar.

Since Lois Lane is the one who exposed Clark her supposed Best Friend, she's a lousy friend even if she is a reporter. Not only that didn't Lois think for one second what this would do if everyone knows? Superman will be too preoccupied saving his own backside to save anyone else. Not only that didn't she think that hmm many people know Lois and Clark Kent are friends so maybe I'll kill her off? In a way after this I want them to Kill Lois Lane off. Pretty much not only a shock move but also to prove that exposing certain secrets does in fact have consequences.

I wasn't aware Trigon was on Mxy's level of power.

He isn't, Mxy is more powerful than Trigon, he always has been more powerful than Trigon. The reason why Mxy isn't much of a threat is because his character is more of a trickster than a villain. Hell pre 52 Joker got control of 99% of Mxy's power and owned Darkseid. Superman only beat him by out witting him as thats the only weakness Mxy's power has otherwise he is limitless. It's one of the reason's I dropped Injustice awhile ago with the stupid inconsistencies.

This movie is going to suck. The anime Ghost in a Shell is visually beautiful, the story and scenes are memorable. But really Dreamworks? Dreamworks wouldn't make any of the captivating scenes in this movie. Theres a lot of nude scenes in the movie too, I doubt Spielberg or even Dreamworks would place any of the nude scenes from the original movie considering they are not known for shooting scenes of that nature along with Scarjo, I doubt she would do any frontal nudity scenes that the movie shows. Sorry to say this movie will be a crappy version of the anime movie.

@bh6shouldhavehadsilversamurai: Daredevil couldn't use his radar sense to find batman. even Superman can't hear him when Batman is using the shadows.

I will go with Raphael on this.

He outclass Robin in Strength,Speed and Durability.

Fighting head on would be in his favour.

Not much in his utility belt that Raphael could not dodge,counter or evade.

The only thing Robin has over him is brains.That would give him a slight edge but not in a random encounter.

I agree on you with the strength speed and durability goes in Raph's favor but as I was thinking on my vote I went for Damian because he has MUCH better equipment. Tasers, knock out gas etc are all stranded gear for a Robin. Skill of the two is split 50 50 where Raph has more in speed and strength but those are none factors if he can't get close enough to use his sai's. Robin can change tactics and take Raph at a distance This would make Raph sloppy as he often gets frustrated when he can't do something, Raph also rely's on brute strength (Big reason why Raph will never be the leader of the TMNT because Leo does use strategy and not just brute strength. This would have been closer if it was Leo and not Raph). This is where Damian's 'brain' comes in to play and uses strategy to win. Raph mainly likes getting in on a fight, Damian can too but thats not his only option so I gave this to Damian solely on these reason's.

Personally, I was debating for Hit-Girl, and I do not mind that she lost the popularity contest, but it most definitely should have been a much closer battle.

Lol Damian beats Hit-Girl even on paper, not just because of popularity in fact Hit-girl is more well known than Damian. She's been in two hollywood movies. Damian has only ever been in an unknown animated movie that came out this year (Batman and son). Hit-Girl is more popular than Damian is.

@frozen: Who has Damian defeated by himself? I'm genuinely wondering since I'm not really interested in the character, and have read next to no issues involving him.

Damian has beaten Tim and has even beaten Red Hood Jason Todd.

I pick Wonder Woman to win.

This is a General Rule of thumb that also works in the real world. All things being equal, if both opponents are similar in strength (meaning each one can cause damage to the other). It’s always the more skilled opponent that will win.

World War Hulk is massively strong and durable but not much else. I cannot see any possible way Hulk could even lay a hand on Wonder Woman Much less land any incapacitating or disabling blow and forget about BFR since she can fly. In all honesty, Wonder Woman would not even need super speed to avoid WWhulks attacks. She can do it with pure fighting skill.

Wonder Woman was born for these types of battles it’s one of her most important claims to fame as a warrior and AMAZON who routinely and purposefully train to defeat opponets who are considered stronger than themselves. Wonder Woman has done just that plenty of times.

The day Wonder Woman or any WARRIOR class superheroes loses to LESS SKILLED being because they simply had a raw power advantage (strength) is the day she/they ceases to be Wonder Woman/warrior. Wonder Woman does not lose battles like this ever.

Off the top of my head, since Wonder Woman’s sword is capable of cutting beings like Superman, Wonder Woman’s sword can easily cut off WWHulks limbs completely incapacitating him without actually killing him due to hulks regenerative abilities. She can rinse and repeat as needed. She stays in character and her conscience is clean since she did not have to kill him. This is a way Wonder Woman can easily use one of WWHulks greatest strengths.... regeneration. against him.

Wonder Woman cans easily BRB WWHulk with her flight capabilities or her lasso.

Hulks raw power advantage may not even be an issue since Wonder Woman could simply remove her Bracelets and gain access to all her natural power which by all accounts is much higher than superman’s base strength level. But like I said above she does not need it to beat WWHulk

WWhulk would need to outsmart and out fight Wonder Woman in-order to get in a position to BFR, Incapacitate or knockout Wonder Woman, which should prove physically impossible given Wonder Woman’s abilities and speed. Even if hulk manages to tag Wonder Woman he is still not strong enough to ONE shot her. He would need to literally out fight her which is highly unlikely.

Unless WWhulk has some other abilities or powers other than raw strength Stamina and regeneration, he would lose every time to someone like Wonder Woman.

I agree with all you have said but one thing is off and thats her bracelet thing since thats only been a 52 Wonder Woman ability not Pre 52. Still Pre or 52 can beat Hulk both versions can beat the strongest WWH and Hulk fans need to know that Raw Strength isn't the be all and end off of combat. Even more so with people like the Amazons who fight creatures much bigger and stronger than they are.

Supes carried her to the sun without her being able to do much of ......anything , then punched her back to earth, despite her carrying Kryptonite

She blacked out from said punch

Then despite throwing the proverbial kitchen sink at him , in her own words all she could do was delay him for a while.

then she went to find Max and cut up supes' throat . That's it. Supes was perfectly fine after( going off immediately to save the world)

all she did in the fight was survive and distract supes for a while, then run

How is this supposed to be a "win" for Diana?

Superman is > WWH Sorry Hulk fans but it is true. Hulk could only wish to hit as hard as Superman.