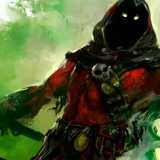 I just really want the quest reward. You can all just bother off.

I really like the original Hulk style, where Bruce gets mad, and he turns into a savage green monster, that keeps getting stronger. All of these different versions of Hulk have ruined the character in my opinion. I think that they shouldn't have messed with the character..... They should've left Hulk alone.....

I absolutely loved this movie. I thought that the Hulk was so realistic-looking, and that all the roles were played perfectly. I even loved Bruce's annoying little heart monitor watch. The setting was really cool. That city they start out in was crazy. I didn't think that you could fit that many buildings so close together.

I didn't think that this was quite as good as Iron Man, but it's just behind it.


P.S. I heard a guy saying that this movie was "garbage." I can't believe him, and I want to find him and beat him down, Hulk style.

The Dark Knight Takes the Cake

I think that I will enjoy all 3 of these movies, but I have to say that I think that Batman will have the best actors and overall screenplay of them all. The Joker is finally getting justice in this movie, as the sick and twisted person that he really is.

I like the new design,  but I think that there was a mistake in taking away how long posts have been up, and I miss the ability to see if someone is online by looking under their name.

I've written a new bio, that's not 500 pages long, so enjoy reading it. And if I can, I'm going to come up with some new art for my new bio! Yay!

Well, I got back to school yesterday, and now I'm here to bitch and moan about it. Well, first off, my 'computer applications' class that I signed up for to learn to better use the computer is all about how to use Microsoft Word for a whole semester. And of course after that class, they shuffled all 800 some kids in my school (which isn't a lot) and it was 130 degrees in there. And don't think I'm just being sensitive to the heat, one girl in the middle of the bleachers passed out and had to be wheelchaired off for medical assistance. So then my Earth/Space science class won't be sooo bad, I have some good friends in there, but Geometry is the worst class of all. It doesn't seem that hard of a concept, but my teacher, Mrs. Giesting, is horrid. I hate her already. I know in math classes, often you have to copy the problem out of the book, like writing down the equation, but since there are very little numbers in the book, we have to copy down the sentences that make up our questions. So that means we have to write out all questions asked, draw all diagrams, and even write out story problems that are over a paragraph in length. If you ask me, she's lost her book, and doesn't know what's in it since it's a fairly new book. Well anyway, that's all the complaining I have about this day, now I've got another set of classes that are going to suck even worse today.

Ok, the Octagon Heroes is my comic book that I draw. It's a yearly issue, cause with school and all, I don't have the time to work on it. But I'm finally nearing the end of the first issue, and I hope to make a photobucket i.d., and post it up their for you all to see. But I'll give you the storyline so far, and maybe future ideas, if I'm not tired of typing by then. Ok, so Freak, also known as me, is telling you about his crimes that he has commited as a child. He and a gang ran around, vandalized, pillaged, and took advantage, just like 20th century pirates or vikings. So anyway, they ended up with a rivalry with a girl that ratted them out, and the leader had her kidnapped and murdered. After that, Freak felt bad, and couldn't turn to anyone for help, so he bought a cloudy old fish bowl, put it on his head with a base ball cap, and ran for the hills. So then it skips so many years, and then it show's him fending off three attacks from The Elite. We battle, with Rainbowe, for lack of a better name, (This was before the whole everyone was gay fad hit my town, and before we knew that rainbows were the national symbol for gays, so my friend we modled this after isn't gay, so we're working on a new name, but he hasn't decided what he likes yet.) Waxman, who is made of wax of course, and Freak, and you know his powers by reading my bio. So we're battling The Elite, composed of a large man known as Massacre, Wipeout, and Decay. Massacre has a cannon attached to his right arm, and it fires concentrated hydrogen-fused blasts of varying strength, and a laser sword on the other hand, much like a light sabre, but more jagged. Of course they can come off, and he also has super strength of about 5 tons. Wipeout is a bikini-clad hot chick, with green hair, and rarely shows her pupils, and they fade to white when her powers are active. She shoots consentrated nuclear blasts from her hands and eyes, green in color, and are very powerful. Decay is basically made of living acid, and he has the ability to control his acidicy. He starts out at a neutral 7 on the pH scale, or as acidic as milk. He can form his shape to whatever he wants in this stage, but he cannot match entricate details, like eyes, ears, that sort of thing, and he usually appears a big slimy blob. When he turns up the acidicy of his body, he becomes very dangerous and almost impossible to contain, as he will melt through most anything. This also hampers his ability to fight in limited space, as he will melt through the floor if he doesn't control his body corectly. Also, in the more acidic states, he has trouble keeping his form, as he becomes more of a liquid, and he breath's acid fumes that can melt through steel. So these titans of power are competing in a grassland type environment, with Rainbowe shouting orders, Waxman taking on Wipeout, and Freak is being ganged up by Massacre and Decay. While Waxman distracts Wipeout, with his dodging of her attacks, Rainbowe is able to strike for above, and knock her out. Then Freak break's Massacre's hold, and contains Decay with a darkness field, and attempts to capture Massacre as they retreat. The rain is falling heavily by now, and the heroes decide to go home. This is where I've gotten to so far, but I'm going to make it something like, when they get home, some other bad guy is robbing a store or something, and our next two members, Captain Morgan and Dexter the Sailor Man are fighting him on the news. We go help, they join the team, and the bad guys team up together with this guy, and they find their new team leader. So tell me what you think if you had time to read all this.