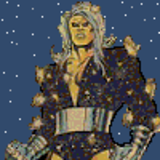 A bug prevents me from posting.

Iron Man, any version, always has been under-rated.

Thanks - I was actually waiting for that tag. Excellent review as always - better than the ones I have seen about it on IMDB.

I hope the movie does well. It feels sympathetic to me.

First, I just love the structure of your review posts; Professional and orderly. You know how to write indeed.

Your review is pretty much what I expected in the later days, as more and more stuff about the movie is un-covered. What surprised me, however, is that you seem to have found the main character interesting, in spite of a muddled background, a lack of general interest, and the apparent wooden nature of Brie Larson.

How do you rate this movie in comparison with Wonder Woman? GotG?

Do Wildstorm count? If so, add the Doctor and Jenny Quantum as well. And Moore's Dr. Manhattan, of course.

Oh, and change one Lantern for Zatanna. And the Flash for Etrigan.

Once again this post shows deep knowledge of the Avengers, but too much concerns for power levels. There are other groups that aim to assemble the most powerful characters around for the sake of powers - the Defenders, the Infinity Watch etc. The Avengers should be an album of their own instead of a "greatest hits". Here is an Avenger team (9 members plus 6 reservists) I would like to write histories for:

Regulars: I think the vast majority will agree that the top three spots are occupied by Iron Man, Cap Am and Thor.

- The Vision: He is Mr Avengers, created indirectly by them, and an icon for the group. He brings much no other memeber can bring, and he does have a very interesting personality angle.

- The Scarlet Witch: Because she is both important to Avengers' history, and one of their few female representatives of note. Her powers still do need some more definition, but her personality is great.

- Thundra: A new Avengers for this lineup, a powerful woman from Avengers' lore, and a counterpart to Wanda's vulnerability.

- Janet Van Pym: Yeah, that's a pun. But she's one of the original Avengers, her powers are still relevant, and she could act as a PR or spokeperson for the group when facing the press and the red tape. She rounds up the minimally 3 females Avengers among the regular, for a 1/2 sex ratio, something that isn't as easy with the Avengers as it is withm say, the X-men.

- Quicksilver, Hey, her sister's already there. Plus, I kinda like his abrasive, over-protective personality, and his powerset also have a niche of its own in the group.

- The Beast (Hank McCoy): He can bring a lot of humor in the group, and his powerset (and scientific skills) might come handy. He is also of a lower power level, bridging the gap between Cap, Janet and the others.

- Hawkeye: Team reservist and trainer, I always liked what he brought to the Avengers, even if power-wise he's rather lightweight.

- Black Panther, when he isn't doing his job as the King of Wakanda.

- Namor, for the same reasons.

- Carol Danvers as the Kree/Cosmic connection.

Eclectic list. I was pleased to see someone remembering Korvac.

I would have found a special place for "League of Extraordinary Gentlemen". My, what a sore disapointment that was. Moore is already spinning in his grave.

Damn you're one smart person - I like the toughts you wrote in introduction; So very true.

And yet some of the greatest tales ever written, tales of old, are precisely about gods and legends - super-heroes of their own times.

@krleavenger: That, too - but it's been brewing for a while. I personally date it back to the Phoenix days - because his love interests plays a big part in the treatment he's subjected to.

Anyway, yeah he is an excellent HTH fighther, but he lacks the, what, signature real MAs should have, maybe. He's more of a brawler.

Cyclops is really, reeallly under-rated. Most hated character in Marvel.