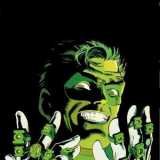 I first discovered Red 5 this last Free Comic Book Day with their free Atomic Robo book. I read it twice and after enjoying it both times, I bought two trades. I am proud to add Atomic Robo to my collection, and other Red 5 titles seem very interesting. Any other recommendations?

Is Dan Didio good for DC?

With all of this New 52 jazz, I've seen a lot of complaining, I like some of it, but I kind of feel like a majority of the books have fallen short of expectations. This begs the question, if DC isn't really delivering the best of the best, and if Dan Didio is in charge, how can he be good for the company? Am I missing something, or does anybody else think that someone better should take the reigns from here?

I've heard A LOT of bad things about this guy, Rob Liefeld. Sucky writing, sucky art, and sucky comments about some real go-getters in the comics industry. Are all of these things about him true, is anything by him worth picking up, or am I missing something?

I feel like I'm one of the like ten people that bought the new Fury of Firestorm #1. I read it and I'm really confused. I thought Ronnie and Jason officially met during Blackest Night (A story arc I am a HUGE fan of) If this is changed then how much, do you think, of Blackest Night is changed?

Disclaimer: I've just recently gotten into Firestorm, so there might be ALOT I'm missing.

Could someone help me out?

Don't get me wrong, I love superhero movies, but it seems like a lot of people start calling themselves "fans" just because they liked the movie. I see Batman "fans" that only know that Scarecrow, The Joker, and Two Face (Supervillians shown in The Dark Knight) are out to get Batman. This is just one of the many examples of people who are so called "fans" but can't tell the difference between Dick Grayson and Jason Todd (If they even know who they are)

Why is Aquaman so hated?

I watch alot of TV... And practically every show that mentions Aquaman, at least once, says he sucks.

What I think they should know:

1.) He can defend 75 more percent of the planet that most heroes can't.

2.) He has more powers than fish talking and water breathing

Am I missing something?

Why are some people so down on Superman? He's an American classic

Every single day I hear people say they hate superman because he's boring and can't be beat...

What I think they should know:

1.) He can be beat (Kryptonite, Red sunlight, magic)

2.) Boring ever picked up an Action Comics issue?

Am I missing something?

Blogs Created:
7 blogs
Most Commented blog:
Why are some people so down on Superman? He's an American classic
Total Comments on blogs:
246 comments