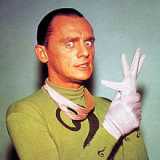 I hope this series lasts. Its great, and I'd hate for another good animated series to be cancelled.

I'm not too afraid. Nick knows how to keep fans happy, look at the Avatar series, they did a major timeskip between series but unlike YJ are releasing lots of material for fans to fill in the blanks.

You think "Kraang rules!" is the best line?

Personally I thought when one Kraang told another, "In Kraang's face" was the funniest line in the series. I shot Coke through my nose the first time I heard that.

@Reignmaker: So, which is it then - is he a qualified actor or just a money seeking hack?

They're not exclusive categories. But it's a financial decision. If you think he's doing it to add to a decorated career, that's laughable. Fan boy or not - take a look around at how the majority of people have responded. You and the other stubborn gotta be different than everyone can have it. Not that it matters much - you'll still be in the theaters to watch.

The way people respond to this decision doesn't mean anything, and had little to do with my original point. People were excited when Lucas announced Episode One also.

Nah, this will be a Redbox rental for me for sure. I'll still watch it of course. But I never got into Star Wars. I was a child of the 90's, not the 70's-80's. Most of my peers that are into this property are into it because their parents passed it on to them. Not that there's anything wrong with that, but I feel like the property as a whole is grossly overrated in terms of quality. That being said, its a proven money-maker - and I believe a savvy individual like Mr. Ford understands that.

Indy 4 wasn't really Harrison Ford's fault, and to a lesser extent Spielberg's. Go back and watch or read any of the behind the scenes and you'll see that all the parts of the film that everybody hates from vine swinging, aliens, and the fridge were all Lucas' ideas. Spielberg actually tried to veto many of them and Lucas just badgered him into submission.

Nothing will ever equal the excitement for Episode One. That was a once in a generation event and as Red Letter Media said "the biggest case of cinematic blue balls ever". Lucas has proven time and again that he's lost his creative touch, even as far back as Episode Six. But with Disney at the helm because Disney is in the habit of not making complete shit, and if they do not more than once.

Idk, I've always liked the name Captain Marvel but after the better part of 30 or 40 years of having a "Captain Marvel" in both DC and Marvel with Marvel owning the title rights, it makes sense that DC would finally make a change.

As for the outfit, he looks like the bastard love child of Superman and the Flash lol.

I've always been a bad guy first kind of dude! I can still remember back in elementary school when my teacher asked the class if we all wanted to fly X-Wings after watching Star Wars and I told her no I wanted to be an Imperial Officer.

No, those guys get enogh exposer, what about Batcow, the Wayne dog, or even Alfred? How about a Gordon comic? I know, Owlman - he it will be like Talon but he is helping the court fight their rivals, like deathstroke but he kills good guys, like Batman but he causes crime - his city is too good, he will fight cleanliness!!!

Does anybody remember the Companion book to Battle for the Cowl? One of the most interesting parts to an otherwise so-so book was where Gordon and the GCPD had to go against A-Team villain Mr Freeze without Batman, and Gordon kicks his ass by the way.

Since I'm the kinda guy who root for the Empire in Star Wars, I would be completely cool with this.

If I was God of the DC Universe:

1) Cancel Batwing, The Dark Knight, Legends of the Dark Knight (as a monthly), Suicide Squad, Catwoman, and Superboy

I think most people would be cool with that and sales would go up.

The Joker is really... CALENDAR MAN!

I think what would be especially interesting is if Joker really knows Batman's identity. That would elevate Snyder to the Batman-writer-hall-of-fame, not to mention add a whole new element of danger to the Bat-Joker relationship.

I don't agree. One of the biggest dynamics of the Batman/Joker relationship is that Joker doesn't want or doesn't care who Batman is. Time and time again the Joker turned down opportunities to find out who Batman is and every time he declined. It almost goes back to how people have this myth that the Joker doesn't want to kill Batman, which isn't the case. While the idea of the Joker going after the different parts of the Bat-Family is a good one, this almost stalker love for Bats is actually kinda out of character for the Joker.