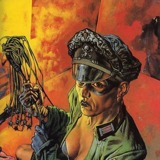 In 2013, Marvel simultaneously released The Savage Wolverine and the fifth incarnation of an ongoing Wolverine series, but ongoing has become a relatively dubious term, as this week saw the release of a new brand new Wolverine book. Of course, Marvel NOW! is resetting the numbers of many of their series, which will coincide with the debuts of many brand-new series, like Ms. Marvel # 1 with a young female character with no ties to her Kree-empowered predecessor.

Captain America, following the Brubaker run that restored vitality to the character, has been reset TWICE. The X-books and Avengers books underwent similar numbering changes after the events of A vs. X, and I've probably neglected a Hulk book and Spider-title or ten. So, what's the point?

On the one hand, with DC's shift into New 52 continuity, Marvel may have done this to stay competitive; DC appears to be reviving the mythologies of decades-old characters, and so Marvel wants to appear to be advancing their characters towards newness and freshness, as well. In reality, DC cherry-picked from the pre-52 continuity so that readers and fans weren't completely lost. Another consideration is that the frequent renumbering gives the characters featured in those books a push, the new debut issue promoted as a must-buy event.

Personally, I hate it. This has messed up my pull-list on more than one title in the past, and I have this dark, wet feeling in the pit of my stomach when I become attached to a run on one of these titles that it's going to fold and a new creative team--one I'm not so crazy about--is going to take over. Perhaps it seems hypocritical, but I didn't mind Dark Horse's similar tactics with Hellboy and Sin City, because the writer/artist remained consistent. With Hellblazer, there were frequent artist and sometimes writer changes, but the numbering remained the same, and each arch showcased amazing writing and art talents.

I've written this as the foundation for discussion. What are your thoughts? Are there distinctive advantages I am not seeing? ...Or has this trend upset you in a similar way? I'm intrigued how fandom around the world perceives this. Humor me?

Whatever Happened to Spider-Man's molester?

In 1984, the National Committee for the Prevention of Child Abuse, with Marvel Comics, created a one-shot Spider-Man/Power Pack comic in which it is revealed that Peter Parker was molested by Steven "Skip" Westcott, a teenage boy from a broken home. Young Peter Parker gets up the courage to tell Uncle Ben and Aunt May, his guardians, what happened, but nothing occurs in the story's narrative to indicate Skip was ever punished or sent away to receive counseling or anything. The focus of the story is smartly on how children should react to this situation, rather than on what will happen to the perpetrator. Three years later, the NCPCA releases another comic with Marvel in which Spider-Man recollects the events during a fight with the Hobgoblin.

I am certainly not bringing this up to make light of the sexual abuse of children. I'm just curious if Steven Westcott has any significance in mainstream continuity. The NCPCA stories are not well written, and the coloring makes Skip look like a handsy Magneto or Quicksilver, but the comic's attempt to engage younger readers and encourage them to speak out is admirable. I am just curious if Westcott had a mainstream counterpart or if he was created solely for these stories (most likely).

This story was reprinted in the 2012 Marvel trade Spider-Man Fights Substance Abuse. An aside, one blogger suggested that Uncle Ben beat Skip to death with a tire iron. What if...?