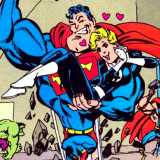 How could you not love this guy?

Truthfully, I wish I could say that I feel outrage on this subject. After watching repeated bastardizations of various different licensed properties in the name of big-screen adaptation, I've kind of lost my gag reflex over such things. I guess you could say I've been jaded.

The costume is so much more than the secret identity. Do they need them conceal their identity? No. To hide scars? Instill fear? Assert their presence? Boost their ego? Flair? Panache? Yes.

My opinion (for what it's worth) could be summed up as follows.

Scenes of homosexual intimacy may not be as up-played as those heterosexual intimacy, but I can't say that homosexual relationships are being downplayed. With greater social acceptance of the the LGBT community in our everyday, various forms of media are becoming more comfortable with depictions or homosexuality. Unfortunately, the mass media is still relatively new to this acceptance. Unless I'm mistaken, (and I may be) it's still been less than ten years since we've seen our first homosexual kiss on prime-time network television. Social change is frequently a gradual thing, but with recent civil recognition (same sex marriage movement/repeal of DADT) of that which was formerly referred to as an "alternate" or "deviant" lifestyle, we're bound to see more and more recognition in the comics.

What concerns me even moreso is the "fad-like" treatment of LGBT relationships in the comics. The determinations by authors to retcon straight characters as gay or to have characters "come out" are being used like an issue-selling marketing-ploy. The subject is being regarded as little more than a novelty. Was Kathy Kane brought into the contemporary continuity as a lesbian because it was a logical character choice, or because they thought the 18-35 male majority of comic readers might think it was or "hot?"

Comics are a driving force in our world's pop-culture... and with the recent aforementioned civil recognition being so prevalent in our pop-culture, it stands to reason that it would prevail in the comics as well. The real question is, "Will the writers, artists and editors use the power of this 'driving force' responsibly?" I, for one, certainly hope that they will.

" never heard of you but good luck with your career!!!  its a tough industry. "

I never thought I'd say anything like this outside of a fetish club, but...

#7  Edited By North Roberts
@King Saturn: My resumé isn't exactly anything to scream over, but yes I'm an actual actor. My next film due for release can be found here...

#8  Edited By North Roberts
@The Scarlet Ronin: I have, under an assumed name, as for what that name is... I'm taking that to my grave!
12 years ago

As a frustrated moderate, living in a society of  dueling partisanship from left to right I've only this to say...

As the presidential stance on healthcare is the sole and foundational lynchpin for accusations of socialism, such accusing parties really need to see the forest for the trees. There are aspects of my own ideologies which defy simple political labels.  As far as the Barack Obama's stance on healthcare, he's looking at  the same system that all of us are... a system in failure unless you can afford your very own private personal physician.

Insurance companies are in the business of making money and will do so by providing the minimally required coverage... but at least it's coverage. Inasmuch, healthcare in this country was "broken" before the current recession and the recession has made it even more difficult for the average American to receive competent health care. So many American's have spent their lives counting on that "minimal" coverage coming through the graces of jobs they no longer have.

"I've got somethin' t'say! It's better t'burn out than to fade away! Hyah!"