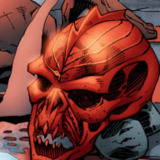 Embrace the purity of oblivion!

Physical: Within the possessed world of Abyssus which hosts his vile spirit, Nordok the Ancient has crafted a more conventionally-sized host body for times when more intimate interactions are necessitated. Composed of the mechanical detritus scattered across the landscape, the 50,000 kg hulk resembles a massive suit of bladed armor surmounted by a leering death's head. The body itself possesses no inherent strength, and it animated entirely by the Ancient One's telekinesis. As little more than an inorganic shell, it requires no rest or sustenance, is unaffected by disease or toxins, and feels no pain. Its durability is comparable to that of titanium.

Non-physical: All Ancients possess a trait commonly referred to as Cosmic Sorcery. This ability allows them to replicate virtually any ability of an arcane or psionic nature, though each Ancient possesses his or her own specialties. They create these effects by manipulating the primal energies of the universe directly, thus removing any need for use of spells or rituals (though some effects may require material components). This affinity also gives them a high degree of resistance to magical and psionic attacks and effects. Nordok can telepathically read and project thoughts, create mental illusions, alter and erase memories, and dominate the minds of others. He can directly possess other bodies, even those of a technological or nonliving nature, by overpowering the resident consciousness. He possesses omega-level telekinesis, an ability that has enabled him to force a moon to collide with its planet in the past. He can create portals of unlimited range, teleport himself to any location he has personally observed, and see through arcane and technological illusions. Nordok also possesses a special affinity for the manipulation of negative energy. He has utilized this aptitude to create legions of undead servants, steal souls, drain the very vital essence from others, and launch attacks with bolts of pure negative energy, which is anathema to any living beings. He has demonstrated the ability to consume the vital energy from entire planets or even stars to supplement his own, though he seems to do this sparingly.

Ancients are energy beings without any inherent physical form. When they wish to incarnate, they create a form for themselves based upon their needs and tastes. Therefore, there is no uniform appearance among the Ancients, as a race or even as individuals.

Nordok belongs to a race of beings commonly referred to as "Ancients," beings that are godlike in power but exceedingly rare. It is a commonly accepted philosophy amongst the Ancients that beings with great power have both the right and the responsibility to shape the universe itself. Nordok took this approach to what many of his kin considered an unhealthy extreme: annihilating entire galaxies when he felt that they were incompatible with his vision of how existence should be structured. Ancients are practically impossible to permanently destroy, however, and Nordok's kin feared that any attempt to stop him would simply result in more damage to innocent life.

Over the aeons, the Ancients became more reclusive, until finally they were all but forgotten. Even Nordok became more aloof from the ever-growing number of worlds his forces had conquered, leaving the administration of his empire to subordinates while he pondered how best to "perfect" the cosmos, which to him has come to mean the eventual extermination of all forms of organic life, as such life has been deemed too chaotic and uncontrollable. Recently, his attention has been drawn to a fairly remote planet commonly known as "Earth." Though the existence of this world has long been common knowledge, Nordok has become aware that humanity is technologically evolving at an advanced rate, and may soon be on the cusp of interplanetary travel. In addition, his intelligence forces have reported that an inordinate number of humans have begun to develop enhanced abilities, so the Ancient has determined that the planet may be worthy of further study, to determine its appropriate place in his designs for the universe.

His initial foray to the third planet of the Sol system brought him into conflict with Lady Liberty, and in the ensuing battle, the Ancient One's physical body was destroyed, and he withdrew to his seat of power on the planet Infernus. Since then, both he and his forces have often come into conflict with the nGoddess and with Trinity Blue, a one-time biological weapon of his Abyssal Imperium, as well as with Velaaru of Illea.