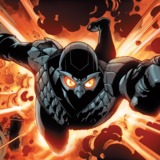 Storytelling, creativity, and experiencing new worlds are my passions. Proud to be a hero of the Vine.

The exact amount of time that Jacob was in a comatose state was uncertain to him, but what he did know was that he had severely atrophied.

His muscled form had become paunchy, his legs couldn't move without the clonus that now afflicted them ravaging his malnourished bones, and he was afflicted by such a psychosomatic state that he didn't even attempt to walk anymore, he sat staring blankly at his city in an armchair, the moon washing over his sickly pallor.

He was, in effect, content to live in his self-pitiable squalor was it not for one fateful day.

Jacob had stumbled across a tome in his study, the work of Joseph Campbell,

"Life is without meaning. You bring the meaning to it. The meaning of life is whatever you ascribe it to be. Being alive is the meaning."

Jacob, through the haze of his listless sensibility, went over the facts bogging him down, just as the world had forced the Titan Atlas to bear its soul-crushing sadism so long ago.

Due to his cerebral palsy, age, and time out of practice make every activity, from dressing to even taking one step hard, yes.

Could the slightest lapse in attention cause him to fall, or become injured more easily than most, sure.

Did he have to pay attention to even the slightest actions of his body, even when the world kept speeding up, threatening to trample him underfoot? Absolutely.

Did he sometimes want to drown in its hassles, because they seemed too overwhelming, and he had to devote every second to sculpting himself, even when he had not even a fraction of energy left in him?

Every day, every second, every minute, this was his duty, his life to live.

Just as Jacob was about to close the book, he stopped, and as a story has its many branching paths, he had options to take with his thoughts.

Because he moved slower, did he have the opportunity to absorb every detail in an environment and interaction, every vital inclination of a person's true being?

Did his appearance in contrast to his personable and philosophical self allow him to demolish stereotypes about those who had disabilities?

He did so every day.

Did his need for physicality and the way he viewed the world allow him to impact others?

If every movement was a challenge, didn't conquering each challenge give him a reason to live, to encourage others to do the same, and to break their own barriers and push past their own biases?

The world, for all its coarseness, needed people like him, everyone, to rise to the occasion, and stand tall to see a brighter dawn, even if that dawn was intermittently obscured by storms.

Jacob worked for the longest time, bringing himself back to prime condition, and best of all, he didn't even have to wear a costume while reviving his spirit, willpower, wherewithal, and conviction was all that was necessary.

OOC: While I'm contributing to my character development with this blog post and looking at the world through his eyes here, much of this is a deeply personal commentary of my real-world lessons learned as a college student living with cerebral palsy.

It isn't easy, but I wouldn't have it any other way.

We all have our adversities, but we should all cherish each other for them, and spread unity.

The age of heroes lives on in all of us.

Feedback and thoughts are much appreciated.