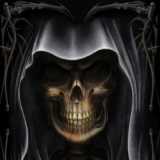 Not much is known about this ethereal being, save for the fact that he assimilates a human form to pass undetected in normal society. Originally thought to be one of Hell's minions, it was later discovered the Nightmare Man had no ties to Lucifer after snatching damned souls away from the devil's grasp. Currently inhabiting the body of Samuel Markham, a student of the occult who went mad while researching facts about the Nightmare Man, this caliginous presence prefers to distance himself from those around him. An observer of humanity, he only steps forward when it suits his black purposes. His legacy remains shrouded to many - only the White Witch has divined scant tidbits of information about the Nightmare Man's intentions during her astral projections. Reluctant to share her knowledge with the world, the Witch has betrayed that the Nightmare Man was seen in many of our planet's possible futures. It has also been prophesied by the mysterious Preacher (a chronicler of dark events) that the reason God created the Light was to ban the Nightmare Man into the darkest shadows of Earth's memories - thus creating a world of hope in the process. While inhabiting his physical human trophy, the Nightmare Man can be temporarily destroyed...until a new body can be found. In his spectral appearance, that of a darkened skeleton dressed in black robes and carrying two metal "walking sticks", nothing on this world...or the next...exists that can render him powerless or dead. Eyewitnesses who have survived the Nightmare Man's more intimate presence tell tales of an articulately sinister being with hollow, soulless blue eyes and a penchant for Mozart. Included in the testimony of one survivor was the statement: "He is the kind of person, if you met him in a dark alley, you would go insane from fear". Records for all of the eyewitnesses also detail that the survivors invariably experience horrific nightmares and, in two out of three cases, resultant psychological breakdowns.

The ability to manipulate lightning, fire and ice.

Telepathy and telekinesis (extent as yet unknown for both powers).

The ability to project his voice.

The ability to see in the dark.

In spectral form: none known.