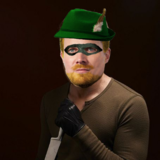 @nickzambuto: do you at least agree that Damian's way better than Roy?

This is a CW vs comic fight that I could see Slade winning, but by no means a stomp, and tbh I could just as easily argue for Damian. The main problem here is Slade's durability, between his armor and regen, would make him hard for Damian to put down. Damian's the faster and more agile of the two, so Slade will have difficulty putting him down, and while Slade should be stronger, Damian's stronger and tougher than a kid his age has any right to be

Also, while this was almost 2 years ago, it's hilarious. CW Roy being anywhere close to Damian, come on...

And the idea that Slade can fodderize all metahumans by virtue of being a "top tier fighter," heh

As for stupidly nonsensical techniques

You can stop a heart by striking it properly in real life. It's still extremely impressive for Damian to do that, I'm not lowballing him, but it is not even close to as impressive as having knowledge of pressure points that don't actually exist, like a tap that puts a man in a false death state with no pulse or heartbeat, and then another tap instantly revives them like nothing happened.

The other scan is super impressive though. But I still don't think Damian is even close to as skilled as Slade.

It does seem that way. We have all failed our heroes.

I'm having trouble thinking of real deuteragonists. Most of my favorite comics, like Alias and Born Again, are very focused on their main character and their specific arc.

I want to say Ben Urich, because in this world of colorful superheroes he is somehow the most interesting character in all of Marvel, but I don't know if he qualifies as a deuteragonist. Sometimes, certainly, but he's traditionally a supporting character.

As far as video games go, Solid Snake was the deuteragonist of Metal Gear Solid 2, and it's his best appearance. He's better in that role than he is in his own games.

@sirfizzwhizz: This is an amazing resource!!! You did everybody!!! I've been trying to get just a Solid Snake respect thread off the ground for years, but I could never make it look right. You beat me to the punch, you win. I'll be taking reference on this format for my own respect threads.

I told you all to leave your comments on YouTube!!! Comments push videos up in search results and help them get noticed!!!

Is that your voice???

Why does everybody always say this???

@nickzambuto: What software do you use to record these arrow clips? Nice vid btw

Just Quicktime Player, nothing fancy. I have a Mac so it came installed on the computer. I just click it, go up to File, "Start new Screen Recording."

She is so hot.

@nickzambuto: nice work. Would appreciate a video for merlyn

Believe me, Merlyn is on the list. It's just that characters like him -- and even worse, Oliver himself -- are bound to be so much more complicated that I don't even know where to begin, just considering their sheer quantity of feats and skills. I started with Nyssa because she was relatively simple to explain, so next I might do either Diggle or Roy.

Really well done. That must have taken ages to compile.

Nice. How long did it take to put together?

According to Google Docs, I started writing the first draft of this script on the 16th. So just under two weeks from start till upload. Imagine how long it would take to do Oliver...

I usually find myself disagreeing with you, but this right here, isn't among those times. Great video mate. It perfectly highlights all of the reasons why Nyssa is my favorite Arrowverse character. I still think she gets the short end of the stick more often than not, but your video really shows just how badass and formidable she truly is. You did a really great job.

Seriously though good video. You have a pretty good eye for detail by noticing Nyssa could have killed Oliver if Malcolm didn't show up, and its also good you slowed the scene down to make it noticeable.

I learned a lot about Nyssa myself while doing this. Previously I always made the claim that Oliver's curbstomped Nyssa every time. Now I think she was actually a little bit better at martial arts until Oliver defeated Ra's.

@5:05 what? That's not the closest anyone comes to killing Oliver at all. But for the most part I liked the video, good work.

The reason I said that is because, although Oliver has taken greater beatings in the past and suffered more, none of it was as certain death as a blade to the neck. No amount of will power can stop a slit throat and the outpour of blood. And there was no backup to rely on, nobody coming to the rescue, no plot either. Just Oliver, alone. This also shows how efficient Nyssa is, because again, Oliver's been beaten and tortured and suffered immensely at the hands of characters like Merlyn and Solomon Grundy, but Nyssa doesn't beat around the bush like that, a slit throat and it is over. That's why I said this is the closest Oliver has actually coming to truly dying, because he was literally inches from death.

I've been a little afraid of watching your videos but this was actually pretty well done and very detailed. Although I still disagree with the Murakuru Roy scene because being deleted would make it sorta non-canon.

Afraid? What on Earth are you expecting that makes you afraid of all things? lol

And thank you to all of you as well!!!

@elijah_c_washington: Elijah and I have been debating Chris Redfield's strength in a PM, and he wants to bring it to an open thread. Basically, what it's coming down to that he doesn't think any gameplay at all can count as feats. Only pure cutscenes, that's it, end of story. My problem with that, is that we're talking about a GAME, we can't judge games by the rules and standards of an ENTIRELY DIFFERENT MEDIUM. Games tell their narratives through gameplay, that's the whole point. When Chris has a fight or battle, it transitions into gameplay. He almost never has fights in cutscenes, for obvious reasons. So by excluding everything other than pure cutscenes... Chris literally doesn't have any fights. So he's featless. What is even the point in debating him if he's featless? We HAVE to give him these feats just so he has something to debate with.

I understand that there's a limit of course. Gameplay is variable and up to the player. So here's my rule of thumb. Animations count, because they are static and set in stone by the developers. Player input does not change the results of animations. Animations basically includes QTEs and context sensative inputs.