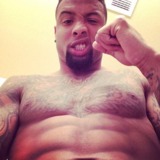 Darkseid can fight with only his strength

I'm tired of this bull saying Darkseid can't fight or he only has the omega beams because this is not true.  Or like people that would say Hulk can beat him easily with is more complete bull.  Darkseid has gone toe to toe with an enraged Superman and Orion and has won and lost.  Why would I say that because I know someone is going to post a picture of him losing a fight against them.  Darksied has had long fights with Orion proved his stamina.  Here we go I wont post this in the battle forums just for the people who click on my page and see this.

This is one long fight lol.  Stamina and Speed...Fighting Skills

What Type of Fanboy are You?

2.Do you make bold statements because of bias.  Ex- Sentry solos the JLA.

3.Do you always try to use a certain version of the character

4.Do you think a certain person wins because they have had a item.  Ex-Thanos w/IG

5.Do you twists people words around and say your character wins. Ex- Changing the person posts.

6.Do you just watch the cartoons and downgrade the character.

7.Will you defend your character against anyone.Ex- Hulk thunderclap will hurt Anti Moniter

If you have any other types of fanboys you can name them and explain...Ex-How the fanboy behaves

No offense to anyone.

Even I'm a fanboy and I admit it to everyone.

Well I'm back I wont be on as much.

Overrated
Just because he had the IG or HOTU fans think he is unbeatable
Just the way they made a such a cheap character gets me mad.

I think he is a stupid character and should just die.
The concept of a scream is just plain stupid.
I always thought that the screaming was stupid it reminded me of silly cartoon shows with girls with loud screams...

Useless can't be beaten by brute force.
That entire concept is retarded...

If you have any characters that you hate you can post them on  my blog :)

Telling from the commercial...I don't really have anything to say about it.  It looks good.

I know people will say Never Give Up your a DC FANBOY.  Or I don't know anything but I do know saiyans can't survive in space.  Bardock flying into space in the movie.  That is pure crap.  I prefer the manga over the anime because manga is much better and evidence is much easier to find.

Well here it is from the fight on namek.

From Frieza's own mouth.

Has anyone else seen these video

Okay I just went on youtube.  I was bored I actually watched this entire video can you watch the entire thing.

Here is the link

Are the Battle Forums going Downhill?

Well I have been on Comicvine for a month now.  The battle threads don't seem as good as they use to be.  Now I see such one sided threads that just make me want to log off and take a nap.  Sometimes I wonder where is King Saturn with one of his good battles.

I remember the first battle thread I went in it was good.

I really liked that battle thread.  But I hope it doesn't get bumped lol.

While we know that the Spectre could not even take him down what chance does Superman have.

Or why can't we have fun debates.  To tell the truth some people on this site or fun to debate with.

Okay I am getting sick and tired of reading people posts that have f#cked up grammar.  I find it very annoying in  battle threads that I am reading a post and I don't understand what the hell it says.  It is beyond stupid rather annoying.  Then the people who can't even make a sentence say how old are you....That just makes me want to curse them out.  You can't make a proper sentence then you ask somebody's age.  I have no problem with simple grammar errors.  I could have made some in this original post.

Here is a example of what I have seen


Okay and run on sentences are annoying to...

I just can't stand them.

I think for battle threads people should use proper sentences and proper grammar.
45 Comments

I have even played the game on cartoonetwork.com when I was bored lol.

The link to the game.

I hope it is good.  Not another let down.  This seems to be old school.  I will give it a chance.