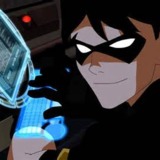 Spider-Man Turn Off The Dark was one of those things where you'd like to go check out but could never have the time or money for it. Yet whenever you do, there's either an excuse not to go or in most cases, had forgotten about it. Luckily, broadway shows stick around for a long time, and while I've was always curious on how this show would turn out, I wasn't willing to sit in a crowd room full of little boys and girls screaming as we watch our favorite characters sing like it's a traditional Disney movie for 3 hours. I wanted to kill some time while I was in downtown last week, so I just happen that I finally checked out Spider- Man Turn Off The Dark. I'Ve been hearing a lot of great things about this show, so lets if it lives up to the hype. Here's my review. Oh, and just for the record... SPOILERS!!!

To sum it all up it's your basic Spider-Man Origin story, so by now most people should know his backstory; Peter Parker is a nobody but some how gets bitten by a radioactive spider and has spider like abilities, Uncle Ben tells Peter about his "With Great Power, Comes Great Responsibility' speech before getting killed by a mugger, is in love with mary Jane but can't tell her about his whereabout for the sake of her safety, dresses up as Spider-man and become a superhero fighting crime, and so on and so forth.. But what so different is that they made some minor tweaking and some changes that would lead up to the events later, and for the sake of the time limit of this show, it was quite a move;

- In this show, Peter goes to a field trip with his classmates where he's bitten by a radioactive spider that was created in Norman Osborn's Genetics Laboratory where his genetic research will help benefit mankind, but once Spider-Man goes public, Norman is angered that he stoled his research and is forced make a decision after being pressured by a Military Organization to execute his project. This will lead up to a confrontation between him and Spider-Man later.

- Norman is married to a woman named Emily, who works with him on his genetic research. What a minute, was he marry in the comics before?

- I don't know if it was intended or just strange coincidences, but the characterization of Norman Osborn sort of resemble the villains in Spider-man movie 1 & 2, the relationship with him and his wife, her tragic death and his mutanted transformation, asking peter to turn to his side, etc.

- There's this Goddess named Arachne that watches over Peter and tells him it's his destiny to be a hero.

- Peter still wins enters the tournament so he can buy a car to impress Mary Jane, but unlike where Peter is responsible for Uncle Ben's death by not stopping the mugger, Ben is killed by a carjacker at home. Thought his changes nothing as Spider-Man's motivation and actions stays the same.

- Unlike the Sinister Six who were made up by previous Spider-man villains in the comics, they were created by Norman Osborn Lab by using genetical engineering on his founder employee's. (More on this later).

Regardless of the changes, it was still a great story. The actors and actress embodied the core of the characters quite well. The stunts and wire work was jaw dropping impressive, I've never seen anything like that was in front of me before and not from the internet. I was really Impressed how they easily kept up with the actors whenever they change scene to scene as well as the designs which mixed with the moods and tones of scene and music. It just shows how much hard work and appreciation these people invest into this project; the performance of the actors/actress, the musicians, the stunt guys, the writers, everyone who ever contributed to this project gets 5 thumbs up from me.

Now with all being said, there has to be a downsides to this story, right? Of course there is, and no matter how perfect a show is there's always somebody that has to do the nit-picking, right?

First off, I don't like this version of the Green Goblin at all. In the comics, he's a major villain that Spider-Man would take very seriously, and wouldn't think twice beating him to death with your bare hands if he killed one of your loved ones. He's like the Joker in the Marvel universe and even once ran a Avengers team. In here, he's more of a goofball, wacky, and at some moments cartoonish character that if he had a master plan, he would tie everyone up on to a chair and torture them by listening to his Elvis impressions rather than blow up a city with his pumpkin bomb. He's a tongue and cheek villain but due to the tone of the show, I understood why they did it since kids were watching this. One thing I've notice is the irony of his death which is a reference to Gwen Stacy death in the comics. At least that was funny. I'll give one credit though, at least he's scarier than the actual Green Goblin in the first Spider-Man movie, put him in there, at least you would think he was crazy.

I don't like the idea that The Sinister Six was genetically created by Green Goblin. In the comics, the villains gained there abilities by the fault of Spider-Man or by other events in there lives, and after losing to Spider-Man so many times, they decide to team up to gain an advantage on him. In here, there just poor unfortunate employees who were Mutanted into Green Goblins personal henchmen and wrack havoc in New York City. At that moment I felt like I was watch a Power Ranger episode, just have 4 different colors of Spider-Man to fight them and there you go, a Power Ranger Musical. Throughout a musical scene, Spider-Man takes out each of them one by one by using one spray of his webbing...WHAT?! We have the Lizard, Kraven The Hunter, Electro, 2 others I don't even know of, and finally Carnage. CARNAGE OF ALL PEOPLE! He's a spawn from Venom and it's host is a psychopath killer, I don't think that'll sit well with kids.

I'm not a fan of broadway shows so you could imagine my irritation when every scene has to have 'characters singing' involved. It also feels weird sitting in front of live actors perform the actions of the characters as though you want to just jump on the stage and tell the character NOT TO DO THAT OR THIS WILL HAPPEN TO YOU - TRUST ME I"VE READ THE COMICS, while in movie theater there the action is on the screen as though it was a fictional world. When Spider-Man was swinging around, other actors dressed up as Spider-Man started popping out running around the floor, one past by me and never said 'Hi'...I was a sad customer that day. And Finally, $79 dollars to see a broadway show... could've brought 5 movie tickets with that money.

Despite the nit-picks, I really 'liked' the show, I can't imagine myself going out to see this again or in any other broadway shows for that matter. If your a huge hard core, badass, Mr. Know it all Spider-Man fan who's brain is like an encyclopedia following up on every single issue, this is for you. If your a guy who's into broadway shows, you'll probably want to check this out. If your a tourist from overseas who like to kill some time and like Spider-Man, then this is for you. Parents who wants to take there kids out to see Spider-Man, this is for you. But Casual guys and girls who just read comics and doesn't like to get involved with none of that nonsense this isn't for you, or even for everyone anyway. But if your curious and in NYC, get it a shot. If you won't be impressed by the singing and dancing, I'll promise you'll be impressed by the stunt work and background scenes. 4/5 stars.

Great review. I'm hoping to go see this if it comes to London.

Edited By Nerd Of A Hero

@guttridgeb: IDK about that, but if it does someday check it out.