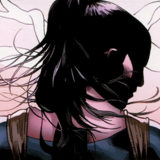 Laura Bailey is the GOAT

The moment that Cat’s tears fell upon Isis’s neck it was as if a whole new deluge was set free. Her body shook in her sister’s arms as if she was exorcising demons that had laid within her for far too long; demons set free through her tears, through her breakdown.

Isis looked up, sniffling, as Cat proclaimed. Her canny eyes caught every little detail. This wasn’t just a hidey-hole for Cat; very clearly not a place for temporary rest and respite. She had turned this place into a home, for both her and her daughter. It showed the maturity of her barely-younger sister, and an ache rooted deep in Isis’s heart, that she had missed this journey, this growing. She had missed Cat.

“You’re looking pretty good,” Isis said, sniffling past the snot that had built up in her nose and brushing the streaks of tears from her cheeks with the roughened backs of her hands.

She turned to Mari, fighting back a brand new deluge. She was perfect. She could see Cat’s bones in her, the strong Liafador sense of self, and the strength that imbued every woman in their family. But she had something different, something that no other Liafador could lay claim to, something that was wholly and entirely her own. She was extraordinary. Her… niece. Isis tested the word in her head. While her circumstances may have recently changed, she never really pictured herself growing old with a large extended family around her. Frankly, she never pictured herself growing old at all.

“You would have ended up in an old ladies home all by yourself, likely with me right by your side,” Isis joked through the remnants of her tears, while continuing to look adoringly at Mari.

“She’s perfect,” Isis whispered, her heart in her throat all over again. Usually it was only Santi who could bring this level of emotion out of her, but this… Isis had laid her heart at her fcking feet and it was at the mercy of Catalina and Mari. Everything she had was theirs in this moment; the entirety of the Liafador Ravager stripped bare.

“You’re perfect,” Isis reiterated as she pulled Mari close to her in a crushing embrace. She had missed so much with her family, by choice, because she’d thought it was what was best. And she still did think that. Keeping an emotional distance between herself and the rest of the Liafadors was self-preservation. But maybe what she was learning was that self-preservation didn’t outweigh the feeling that washed over her with her arms wrapped around Mari. “I’m so happy to know you.”

The megawatt grin spread across Mari’s face was reminiscent of the bulb-bursting grin that Maya and Selene so often employed, to the charmed detriment of all.

Isis held her tight, then reached up to push several strands of hair off of her face, gently cupping her bronzed skin between her hands. Looking over to Cat, with dread in her stomach, Isis mulled her next words, hesitating to break the perfection of the moment.

But she had come here with bad news, and she knew that more landmines lay ahead. “I know something is going on with the family right now, and I know all you’ve just told me. I can’t do anything to change what’s happened, but will you let me know if there’s anything I can do?”

Isis let go of every ounce of pride she had, fully expecting to be shown the door. If roles were reversed she wouldn’t trust her an inch.

And just like that I unequivocally wanna kill Zeon again.

@sovereign_son: I hope everybody over there is safe and healthy. We miss y'all.

Need to plot this book in Scrivener before I write this Lena post.

Maricela. Isis fought the lump in her throat as she looked Catalina’s daughter, her niece, up and down. She carried the same features that her mother had previous to her transformation, a subject Isis was not even going to begin to approach. Isis focused on the young Liafador as her sister rightfully tore into her.

Cat’s barbs launched and struck, digging into her skin and burrowing into her soul. Isis fought back the wince as she followed her sister into the luxurious living room, her back ramrod straight, still bracing for an attack should it come. She saw that Mari did the same, moving with a tactical ease that broke some part of Isis. Much of what she did was so that the next generation would not have to carry the same trauma that hers did.

Isis tracked her sister as she poured clear alcohol into a tumbler, and bit bqck a smile as Mari exhibited the classic Liafador sass. She reminded Isis of what Catalina could have been if circumstances had been different. It was so clear that she was safe and loved and cared for, and another piece of Isis shattered into pieces at the thought of what her sister could have had. Something in Isis was cold and stone and had been broken by the betrayals of Ziccarra and Quintus, in a way that her father hadn’t managed to break her as a child. Catalina was broken in different ways. Mari seemed whole. Or at least secure.

And powerful, Isis noted, as Mari altered the room with but a thought.

Isis stood there, her hands at her sides as Cat laid into her with a voice like a whip, every new recounting another lash that cut deep into her flesh. The family had fallen to pieces. She had removed herself in a bid to protect them, and instead had been so far gone she had been unable to do anything to stop the bloodflow, all stemming from Zeon. Isis refused to rebut anything. Catalina would never understand, should never have to understand the burden that Isis had willfully taken on, albiet poorly so, it would appear. The last time that Isis had come to her family for help and tried to explain an absence, she had launched the famiy into a war against the Knightfalls. She refused to be responsible for any such thing happening again.

There were additional circumstances, Isis thought, that explained her absence that she willed never to come to light, for if they did, all she had done so far was lost.

Instead she stood there, a wet sheen in her eyes, simply nodding in agreement as Catalina rightfully tore into her. She swallowed past the lump in her throat, as she fought the urge to explain, to rationalize, to placate, all the time knowing that she didn’t deserve Catalina’s understanding or forgiveness, and that this verbal lashing was the least of what she had coming to her.

Isis was well accustomed to wounds that shredded her skin and resulted in blood. These wounds were of a different sort, and all of her own making. This was but a small portion of her penance.

She winced again, her nails biting into the soft flesh of her palms, as Mari lobbed a verbal bomb at the two sisters. She shouldn’t have come at all. She should have come before now. She should be different.

Warmer, more loving, more in touch. She shouldn’t be hiding the secret that she was. There were too many shoulds, and they threatened to drown her under the implied woulds, and coulds.

But she was here, and so she could only trudge forward on the current trajectory, ignoring all the alarm bells in her head that warned her of the consequences for what she was about to do.

“Be sisters.” The lashed order was foreign to her. What had family ever been to a Liafador but a wound in the gut? Blood turned on blood, spouse on spouse. Not even Tassi, the most innocent, the most pure, had been free from it. If family wasn’t loyal to Tassi what the hell was family anyways?

She turned the word around in her head as her gaze narrowed on Maricela in dangerous contemplation. Maybe they could build it, become better than what they had been given. Maybe trauma wasn’t an ingrained genetic, but a wound from which scar tissue grew and the body became stronger. She had to find a way to make things better for the next generation or all was lost, and if she couldn’t start by trying to bridge the gap with Catalina?

This may be all for naught, but at least it was hers.

Isis stepped forward without further thought and wrapped her arms around Catalina, resting her head in the crook of her neck, not bearing to even entertain the very real possibility that Catalina could and would turn her away.

Where the two used to be of equal heights, Isis was now forced to tiptoes, but it did nothing to stop her forward trajectory as she landed in her sister’s arms.

Silent hot tears fell onto Catalina’s neck as Isis tried to hold back sobs at all they had lost, but all they could still gain. “I missed you. I'm sorry,” she whispered against Cat, as she tried to gather herself together with no success.