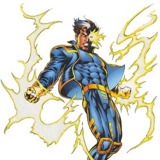 Mark Waid for sure. A lot of core concepts, such as the Speed Force, were created during that run.

This sounds like his "redemption" would involve getting rid of the events and consequences of the various actions he took part in from around Decimation onward, which i'm 100% against. Because right or wrong that was a great character arc for Scott Summers, which pushed him to the brink and back. Just sweeping all of that under the rug would be silly. What I think should happen, however, is that he's revived in some way and we see him gradually return to a more idealistic version of himself.

The Owls have lasting power and while I find them underdeveloped,uninspired and contradictionary they have potential.

James Jr was a superior villain in Black Mirror but he shouldn't have been Gordon's son. His relationships made him a compelling one off villain but he's simply unwanted when it comes to the larger mythos.

I think Mr Bloom could've heralded a new era of Bat villains had Snyder played his cards straight and displayed boldness plus vision.

Couldn't have said it better myself. Overall, I like Bloom and Jr. more than the Owls. However, I would never want to see Jr. outside of Black Mirror, whereas the Owls can be used over and over in my opinion.

I thought Bloom was fantastic.

Origin- Equal. Boy see's his parents gunned down, grows up with the guilt and helplessness driving him to never allow anything like that to happen again to someone else. Therefore, he trains himself physically and mentally to his peak and takes to the night to stalk the cowardly denizens that prey on the good people of Gotham. War profiteering industrialist is wounded in the middle of a conflict overseas, which requires him to design and don a suit of armor in order to not only save himself, but to stay alive, after which he gradually undergoes a change in morality that causes him to leave the weapons business for other pursuits.

I honestly feel like you could easily find one to be more compelling than the other, but can't see either really being described as more complex, when you delve into the full history of the characters. They're each going to pull at different strings and emotions, while never really being a simple one and done kind of story.

Parental Issues- Iron Man, no contest. Some of the scans posted above are just the tip of the iceberg. For canon Bruce Wayne, his parents are pretty much saints. I think that every now and again there's a depiction or flashback implying that Bruce's dad was always busy at work or something, but for the most part he's portrayed as a doting father and a hardworking man who genuinely wanted to help his city. I feel like Martha is barely ever mentioned as much, but that she also hasn't ever been portrayed as having a single flaw from what I can remember. She's basically Uncle Ben, but less interesting, because she never gets any development lol. In comparison, Iron Man's parents are a mess. His mom is great and loving, but has to deal with his alcoholic, and really just plain abusive father. Honestly the MCU has done him a favor, as his word issues with Howard there seem to be that the two just didn't understand one another. And I actually think that Tony is even more screwed now with that silly retcon having him be adopted, because he still ends up with all the baggage that came from being raised by Howard, only now he was also separated from his biological parents as well. Bruce's parents might have died in tragedy, but at least his relationship with them was solid.

Women- Equal, because neither has a list of healthy relationships with women.

Mess as a Person- Equal. Both are emotional and mental wrecks.

Guess i'm the only one who loved it and thought it was great. Solid adaptation of the source material and easily one of the best films DC has come out with in years. Only real complaint is that the sequel, Master of the Future, wasn't fully adapted into it.

Late to the game, but i'll say The Reigning. Yeah, Thor was basically the villain of it one all was said and done, but he realized it and went back and changed things. And that's part of why it's so great. It's his journey from hero to villain and back again. It's pretty long, but I appreciate the dedication to showing how he came to make his choices and gradually fall from Worthiness. Definitely one of the best stories in Thor's long history.

Go with Jurgens. I have it myself and my only complaint is that a second one is needed to grab the rest of his run.

Eternals Saga is great, but the Ballad gave us Bill, who has grown into a beloved character in the mythos.

Kind of kills the purpose of what Batman is but with that being said, him being classed as a meta isn't ridiculous.

Yup, Batgirl, Batwoman, red hood and the outlaws, and Batman Beyond are in trouble... Nightwing, teen titans, and super sons are in the safe zone, props for Nightwing because since its bi-weekly its twice as hard to have the numbers that they are having...Titans, Justice League, Detective Comics, Batman, and All star Batman, are all selling well.

Everything above 20K, is usually save. And at least Batgirl and Red Hood have been quite stable in the last months, the other two are imo more likely to drop lower. But I still think that DC needs to put more efford in pushing Barbara and Jason. The get sidelined (or really bad treated) way to often in the bigger events.

Btw, i only now noticed that Detective Comics is actually selling better than Justice League :P both titles are selling sightly above the 50K mark, but "Tec" is selling better by a bit, they are both going strong though.

The current JL run is afaik not that well received.

Said it before, but if the rumors of a Batgirl film are true then this is doubly true in my opinion. Batgirl's title is in trouble and has been for a while now. They need to look into completely revamp the character and direction at this point.