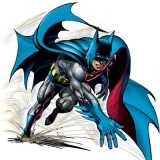 I know we have seen it thousands of times, but that Wolverine and Hulk image is outstanding! And I don't recall seeing a Venom-Gwen before?

Not really sure I am feeling the choice of actors

I want that Flintstone cover as a poster or t-shirt

Very conflicted by this story..

But that being said...every issue I have objections to the out of sync habits of the characters, however I am still engaged in the plot with what has been presented so far. I really liked the court room setting, I also enjoyed the cliff hanger ending, guilty or not, and How does Ulysses tell the future?

Overall this storyline is suffering from the weight of the title it bears, This would have been a much more enjoyable story with a different name, but with the Civil War tag...there really isn't enough there to see such a major split in the hero community. Tony is coming off looking childish as opposed to having a legit concern, which I assume will change in future issues know that he seems to have some evidence to back his claims up.

this is a exciting week, looking forward to a lot of books

To me, I could make the argument that it looks like Bats used Grundy's momentum against him, and stomping on his throat.. as opposed to him pressing him with one arm and slamming him like Brock Lesnar vs The Miz

But in any case, no need to jump to any type of conclusion until after I read the story

seriously...were complaining about fonts now..!? hahaha next level hate, I luv it

Hmpf..probably a pair and switch storyline..But if they do leave..all I can say is good riddance and ...