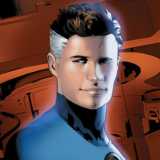 Is this the worst Superman costume ever?

I just found this on the inter webs. Is this the worst ever?

Have you seen this yet?

That is totally awesome!

Can I kill off 2 quests today?

I've added 3 more titles to my stack.  maybe I can convince her they are part of a limited series....

Is there a 12 step program for Comic Vine Quests?

I am going to have to put myself in rehab after this.  My OCD has taken me over completely.  My biggest fear?  I will be left with nothing but the Mod Quests left and I will have to hustle my butt off to become a mod....

Spider-man has had more than his share of really cool costumes, and just about the time you get used to his newest, coolest one he reverts back to the good old blue and red.  Now that he is joining the "Future Foundation" (the renamed Fantastic Four), he gets a new look - no doubt made of unstable molecules. I have to say it is a pretty nice look, even if it is not very practical for slinking around at night fighting crime.

But that is fine.  As a member of the Future Foundation he won't be slinking around. The FF has always been an in your face kinda fighting force.  The new FF is working toward a brighter future, so the white suit metaphor works.  Spidey has already had his share of time wearing black.
The issue is it looks a lot like Fantomex's X-Force costume (which is also not very practical for sneaking around killing people).  Hopefully the two never have to fight each other, as we may never know who won....


And X-Factor better not cross the path of the Future Foundation or Marvel™ will have to release the issue in Black and White.


Sure, we all know the least expensive printing inks are black and white, but has Marvel gone to far with the black and white.  Is it overdone, or still chic cool?
3 Comments

Is Valeria Richards EVIL or just a little confused?

For years I have been watching lil' Valeria grow up. It might just be me but she has always had a dark side. There have been lots of hints as to what might be her true nature such as.


Her birth was pretty unfortunate, and her very early days include some pretty bad vacations. Now her uncle is dead an what is her only solution?

So had Valeria "embraced the dark side"?  Is she Doomed?  Have I blown a few little quirks out of proportion?  What do you think is up with Val and why?
26 Comments

Have you been working on the "Breaking and Entering" Quest and gotten no where?  Post a reply here and I will play tag on your wall.  if we get 10 people working together on this quest we can knock it out in a day.  What do you say?

Earlier today the 2010 comic sales were posted and with a little effort I have transferred the data into a data base I can manipulate.  The full article can be found here:

I was asked to work up some numbers on sales, so I am posting what I was asked about. If you have a request, PM me and I will get you the numbers you are looking for. I am not planning to work up every title.

Chris Evans contract is for 6 movies as Captain America!