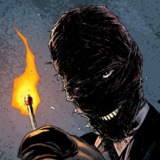 2 weeks in a row without a character of the week. We don't even know who he character of April is gonna be cause we eerebt ever as...

Another Marvel event with massive gaps between issues. Why am I even surprised.

Like, how are they gonna release a preview for an issue a month out. Didn't #4 come out almost a month ago as it is?

I miss these articles

I'm starting to get really frustrated with how each of these issues are high price (as far as comics go) issues and each of them is some jumpy set up issue. I also really dislike how there was no indication of the passage of time. The issue opens in the court house, with flashbacks telling what happened at Banners lab. How much time has passed? Obviously a significant amount since Carol and her team have been playing Minority Report, but it really removes me from the immersion when you have no sense of time in the story.

I hate Ulysses. I hate that he's always nervous and shy and doe-eyed. I just hate him. He's Marvels newest "snapshot" character-- a character they create as a summary of current youthful trends. So many of their characters are like this, and they always get pushed to the back in order to make room for the next one, next year.

As far as Ulysses' vision goes: I think the Hulk really will beat the Avengers within an inch of their lives (and maybe even further for some of them). Banner is dead, but I'm betting the Hulk is still alive within his body, and as we've seen before, when Hulk is free of Banner, he goes absolutely green bananas. He seemed naked in the vision, which we typically don't see. Gives a bit more to the primal feel of a Banner-less Hulk, imo. As of now, I'm thinking Banners death was just a bait-and-switch.

I thought this issue was pretty interesting, and it was a nice recap of what has happened with the League recently as well as bringing in the new Superman into the fold for good. Diana's "we're the Justice League. Run" line was pretty awesome as well.

However, the writing on the low end of the spectrum. For instance, did anyone notice Aquaman says something along the lines of "I couldn't understand it all, but this is just the beginning" three times? That seemed like an oversight

Why does Red Hulk even need guns?

Calling it now: this team will end up having to go after the main Avengers at some point

Is that a new War Machine on the right side? Also what's the dividing factor here?

Really enjoyed this issue. The writing for when Batman is describing each character is really engaging as well as continuing to show how different this "reborn" Batman is when compared to his pre-Endgame-- I mean, how often does Batman speak so highly of his allies? Also the art was just incredible, dude. Definitely my favorite of the current Batfamily artists.

I hope Duke Thomas shows up in this as well at some point. Anyone know anything about that?

This issue was great for furthering the overall tone of Rebirth. I'm also really glad Duke finally appears as Lark after being teased in the first issue of Endgame. All of the Bat-fam looks really great this year