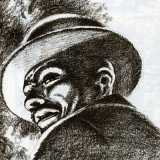 Lee is an African-American born in Texas. Much of his life was undocumented until he reached 30 years old, after he murdered a man during a drunken argument. Since he killed this man, his powers have been particularly sensitive and he has started drinking heavily in an attempt to numb these powers.

Lee is an amoral and lawless criminal. Lee is incredibly short-tempered. Should one irritate or annoy Lee, he will not hesitate to attack. When calm and among friends, however, he can be friendly and good-natured. Because of his violent nature, Lee had developed a dangerous reputation in the St.Louis area. The discovery of his powers unsettled him, so he retreated inside himself, and started drinking to numb the effects of his powers. Lee demands fear and respect from other people.

Limited Shapeshifing- Lee has the ability to shapeshift his own body into weapons. This is affected by his temper. If angry, his control over the power is limited.

Seeing Spirits - When Lee was born, he was born with a Caul over his face. This was both a blessing and an omen, as it granted him the power to see spirits, but also destined him for trouble in his life.

The Stetson Hat - Early in his life, Lee was tempted by African trickster god Legba to sell his soul to him in exchange for this stetson hat. The Devil had enchanted this hat with great power, including control of the Preternatural. Among other things, control of the Preternatural enables him to wield considerable influence over people. The hat also gives Lee advanced reactions and toughness (approximately a blow from a sledgehammer). Without it, however, these powers are removed.

The Smith & Wesson Model 3 was produced in the USA between 1870 and 1915. This is Lee's weapon of choice, having owned it for many years. Lee can shoot this weapon very accurately, even when drunk. This weapon uses .44 calibre ammunition, which can easily stop a human, but will not be as effective against anything stronger.