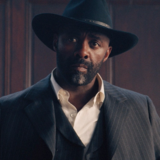 Love the X-Men and some of the new Krakoa-era stories they've been pushing out. Marauders, Hellions, Inferno...so fun

I think Hawkeye should of died over Black Widow. For IC and OOC reasons.

I would love to play an open-world Star Wars game as Darth Vader. ^_^

Can't you do that on Star Wars: the Old Republic with a Darth Vader build?

The Texas Ranger anchored down on a haystack and sparked a cigar. It was boredom. Boredom that inspired him to take the wages of a German and go on the hunt to obtain stolen wages. The haystack needled into his back and neck so he pulled out his rain-soaked slicker as a buffer, sprawling it over the prickly stack.

“So you tellin me them Indians holed up some place called Creedence Junction?”

“You was tellin me they was holed up here? So how i’m posed to credit your word Mr. Astor “

The German immigrant could feel his hired gun’s patience wearing and he punched back with: “We can go on wild goose chase across thee frontier, what does't matter if I pay you?” he ended his question slamming the empty tin can of coffee on the table.

With his belly full of salted pork, corn dodgers and whisky the Lone Ranger quietly thought he had a point. Why did it matter how long the pursuit took if it just increased his wages and he reported to the Southern Border in roughly two weeks on time?

Fetching the map in his buffalo-skin coat, the Negro Ranger charted their course from Wayward to this Creedence Junction. “Creedence” he pointed a finger at the town in the middle of nowhere. Puffing smoke out his mouth from his Sancho. “So we East, Credence west of us that’ll take us about two days trip on hooves. We gon be dealing wit bandits and Indians no doubt. Let’s sell our stock and catch the morning train. Quicker and safer that way. ” The "for you" was silent, but Astor picked up what he put down.

The Lone Ranger folded and pocketed his paper map, sitting up with a exhale of smoke laced air. It curled up slowly around him, obscuring his face already partially covered by the tilt of his black Stetson Stallion hat. "Let's pack up, sell some horses and train to Creedence."

@scarlet_ have not forgotten and will work on these today