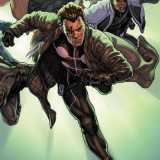 My Scott Pilgrim vs The World review and stuff...

There as an advanced screening of this movie at Universal Studios (in Florida anyways) for employees.

I have to say I enjoyed this movie a lot.

I only read the first 3 volumes, and if you are a fan of the series and are worried if it stays true to the source material I can say it does. It starts just like it does in the comic and the dialogue is almost identical, right down to the captions! Even Scott's room house is almost a complete replica of the comic, but as the movie goes on it starts to take more and more liberties such as extended fight scenes (which is understandable) and misplaced events (which actually works, so its not something that detracts from the movie).

It is really funny, there are tidbits in between where it gets a bit slow and lackluster, especially towards the end. But most of the time there is enough funny to detract and I really enjoyed the characters Wallace and Young Neil.

The fighting scenes were really cool, and I loved almost all of them. With the exception of the final fight and the fight against the twins,  every fight was really fun to watch. There were certain tidbits that were left out, or altered in someway, but nothing that was enough to bother me from enjoying the movie. Michael Cera remains his usual quirky self, which I have grown annoyed with in past movies, but it worked for me in this movie, probably because he had an extra sense of arrogance.

Overall it was funny, visually awesome, and hell of a lot of fun. It stays as true to the source material as possible, but being an entirely different media it is understandable when they choose to take liberties and truthfully the liberties aren't so dramatic...it 2 in the morning...i'm tired...

One of the major factors that attracted me to Marvel (and recently DC), or comics in general, was the shared universe. The idea that so many different characters coexisted in this bad ass world and fought bad guys and what not. It was an appealing concept, and of course when you have thousands of characters living in a single universe spread across several different books, continuity is always an issue...at least it is for me.

I know continuity isn't a big deal for many people, but personally when I see an inconsistency, OCD takes over and I try to justify it and get it into my own twisted sense of order, just because. So what sprang this up? Recently I was reading Amazons Attack and there was a point when Hippolyta demanded the United States Government to surrender, that they had one day  to decide. In a following issue, however, when they present her demand again, it went form being one day to one week. But this only got me thinking...how much inconsistencies like this actually bug me.

Another one that bugs me, in the Children's Crusade mini-series, where Steve Rogers is still Captain America and Tony Stark is still in his Extremis Armor. I know the reason for this inconsistency was explain, but that doesn't make it any less annoying, especially for someone like me. This isn't to say I didn't enjoy it, I LOVE Children's Crusade and can't wait for the second issue.

So I am a huge stickler for continuity, it just makes the stories better for me. So much so, I kind of avoid out of continuity books for this exact same reason and find myself doing more research than is healthy just to discover if a series is in continuity or not, and this is all before I even decide if I want to read it or not. Not that I haven't read out of continuity books, I have and have enjoyed a good number of them, but they aren't high on my list of priorities.

For most people I have talked to it is the stories that make the comics worth getting, and for me it is as well...to a certain degree. But mostly, it  is three factors: The character(s) involved, the art (hate fugly art), and whether or not it is within the main continuity...

I don't hate the inconsistencies, in fact in most cases I can live with it. I just linger on it for a while and the move on, but it is bothersome and I never have been part of a community where i could share these feelings, if for no other reason than to just make them known...

Anyone else with me on this? Or am I just weird in so many different ways?

Women of Marvel vs Women of DC

Here I am sitting late at night (or early, it is 4:30am) and something came to me. DC's female characters get far more exposure than Marvel's female cast. I might be wrong, but the only Marvel female I can think of who has an on-going title right now is Black Widow. I know Elektra used to have one and Ms. Marvel had one that ended a few years ago, Black Panther was taken over by Suri for a while (but will she return now that T'Challa is back in action) and I don't even know if Spider-Woman's is going anymore or not. As far as I know, Black Widow is the only one and that is rather recent. There is Hawkeye and Mockingbird, where obviously half of the main cast is a woman and several of the major team books have at least one major female role, but in terms of on-going/solo titles...is Black Widow the only one? (as far as I can tell, yes she is)

While I was going through DC, I saw DC had several on-going series that had a woman, off the top of my head: Birds of Prey, Supergirl, Batgirl, Power Girl, Gotham City Sirens, and of course Wonder Woman. While some of these books don't seem to be as popular and often overlooked by the more major titles, the fact is they are there and are centered around a female character(s).

What's the point I am trying to make? Well, it is early in the morning and I can't sleep...so it is really one of those random observations that came to me in a period of extreme boredom. But, Marvel does have many female characters that would may be deserving of their own titles, or am I alone in thinking that?

I've been becoming increasingly interested in DC comics since joining Comic Vine, but beyond who Batman and Superman are...I don't know anything about the DC Universe (I am a Marvel reader). I would be interested in getting into some of the DC series, but I don't know where a good place to start would be where I would have a good grasp on the character and the universe as a whole.


So for any of you DC fans who wish to help me out, what are some of the books you think I should look into? Batman and Superman have quite a few books and I don't know which I should follow, which do you think would be best? I am not a fan of the older/outdated books...so if we can keep them relatively recent (like as far back as 2000). I am open to any DC series out there.

Thanks in advance, guys.