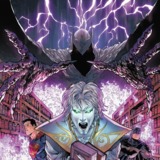 A short Destiny of the Endless Respect Thread

Destiny is probably the coldest of the Endless for Destiny sees things as they were, as they are, and as they shall be

Destiny's Book was given to him by his father, Father Time

Father Time gave Destiny all he has his birthright

Before you say that the Book only contains a universe, keep in mind that Gaiman barely if ever used the word Multiverse

the Book contains the Universe, all versions of it

The coming together of Father Time and Night makes the universe possible, every version of it

Here it is said that from Destiny's vantage point straddling the universes, he could see all that was,is and will be

Destiny is the oldest of the Endless, but how old he really is?

so it is likely that Destiny is as old as the Voice itself (since the Word was created when the Voice first speak) or maybe just slightly younger than the Word.

A book created from the shadow of the destiny's true book

Just like the other Endless, Destiny can split himself into different aspect of himself

The Basanos are a living Tarot deck created by Meleos while coping from the book of destiny of the endless, it developed a mind of their own and became the enemies of Lucifer