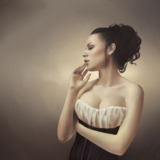 I particularly regret this name change

I don't know WTF is wrong with me today

My run as the writer of Animal Man, and the series itself, will come to an end with March's Issue 29, an issue which I will both write and draw along with Travel Foreman.

As sad as I am to be finished writing the solo stories of Buddy, Maxine, Ellen and Cliff, I am also excited to announce that I will continue to write the monthly adventures of Animal Man when he becomes regular member of the new JUSTICE LEAGUE book I am writing.

After finishing the script for #29, I felt I had completed the story I wanted to tell with the Baker family and thought it was a perfect ending for the series. The best way for me to explore new things with the character would be to move him to a team setting and shakeup his status quo, DC agreed, and the Animal Man series will end with my final issue in March.

And, that last issue will be even more special for me, because I have not only written issue 29, I will also draw the majority of that final issue as well! Original Animal Man artist, the mad genius that is Travel Foreman, will join me to illustrate a framing sequence for my pages. And, my Sweet Tooth and Trillium collaborator, Jose Villarrubia will colour my pages.

I'd like to thank all of the readers and retailers who supported Animal Man since September 2011, making it an unlikely success. I'm very proud of the stories I was able to tell along with amazing talents like Travel Foreman, Steve Pugh, Scott Snyder, Timothy Green III, Lovern Kindzeirski, Jared K. Fletcher, Rafael Albuquerque and Cully Hamner and Joey Cavalieri.

I'd also like to thank DC Comics for allowing me to finish my story on my own terms, the way I wanted it to end.

I look forward to plenty of more excitement and adventure with Animal Man in the pages of Justice League. I've written the first five Justice League scripts and Animal Man has really taken on a new life in the book, so I hope you'll come along for the ride.

@clara_mass: Glad you're enjoying yourself :)

@cassuis_slay_knightfall: I don't care enough ;p this frees me to use other characters.

Plus I love the route he's going. Reminds me of Isabel from Arrow.