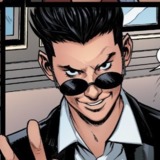 @EvilTyger: With the silhouette I would say it's going to be Silk!

I was gonna give this series a shot because I wanted to see the New-NEW! FF come together but that first issue

It's nice to have a sense of attachment to an object that you love so much, but.....the way she said it was weird lol

This was GOOD issue Beast finally got what he deserved. Storm being a Badass. Megneto being awesome. Emma being smart. Dazzler taking out Black Bolt. Great Issue......

HAHAHAHA the Inhumans are about to get STOMPED.

Cool costume, but...it's the same as X-Force Wolverine. I was thinking more like a totally different design or something.

*I know I know, but I like Carol more than Tony soooooooo*

I LOVE this FINALLY.

I was going to get this, but I don't want to spend to much money trying to save so I'll pass sadly.

Was looking forward to seeing the X-Men kick the Inhumans' asses but after DoX and seeing Storm and her team being as guilty as the Inhumans, I think they should all die.

What the x-men do to make them as guilt as the Inhumans? I ask because I haven't kept up wit the inhumans or X-men.

The past year in Marvel Comics, any time Cyclops was mentioned post-mortem, his name was cursed as this Mutant terrorist. In Death of X, we found out why that was - Because Cyclops found a cure for the Terrigen mist killing Mutants by neutralizing the cloud. The Inhumans didn't like it so Black Bolt killed Cyclops and Storm, along with her team of X-Men, sided with the Inhumans over the dispute. Cyclops died a hero but Marvel decided to make him a despot.

First off that was a fake Cyclops and second they did not find a "cure" they found one small solution to stop half of the T-mist which took the life of one mutant. Storm's team arrived when fake Cyclops died she and the rest of the X-men did NOT side with the Inhumans because they were being held up by Magneto stopping them. Third of all fake Cyclops didn't die a hero he committed suicide and then was made into an idea courtesy of his crazy girlfriend.