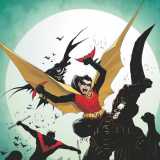 I think a lot of people forget that it's not always the degree you get, but where you use it. For example in my area, it's very agriculturally heavy, so certain degrees are useless here like a psychology degree. I knew a person with an accounting degree and couldn't really use it here. You have to be able to move for certain degrees. A gender studies degree would be useless here, but in an area with more social services, it would be much more beneficial.

I was thinking that the three Jokers are similar to what happened with New 52 Superman and Pre-New 52 Superman, that they are actually part of the same person.

Few years ago I would have said Jim, but his rant on violence and gun control AFTER he just did Kick-Ass 2, really turned me off from him.

Have him smashed between two worlds during the prelude to a giant crossover event. :P

Easy, though someone else already mentioned of the powers I would say. Time manipulation and Invulnerability. Travel back in time, prevent them from getting their powers/training. Or I can easily plant the seeds for my victory later on. If I can't have either of those powers, then probably Matter Manipulation, but like Deathstorm, not Firestorm, and be able to alter organic matter as well. Turn WW into kryptonite to defeat Superman and do whatever to take out Batman. Granted I could just turn any of them into salt or something, but it seems a little more diabolical to use one of them to defeat the other.

@lvenger: still better than keeling over just by looking at a rock.

Except Kryptonite is shown to be radioactive and has killed humans who had long term exposure. Also, didn't Goku die just before the Cell saga due to an illness and then (Future) Trunks went back in time to prevent it? So yeah, Goku got sick, and died.

Yes, easily. It's weird when people are saying Barry doesn't have the high end feats. Did they forget that he has went back in time multiple times due to his speed?

@doc-holiday: Eh, I don't think Miles was shoved in. They did well in establishing his own rogues gallery early on and giving him his own supporting cast, which I feel helped him a LOT. Same with Ms. Marvel, who is technically tied into another hero, Captain Marvel (Carol Danvers), the previous Ms. Marvel. At least her tie in was a little more of a tribute than anything.

I've also really enjoyed Image over the past few years. I'm finding myself reading almost more of their stuff than the big two. DC I'll let figure out what they're doing first before I start reading again. Marvel I'll still give a shot. Also, I've grown to like Flash Thompson as Venom way more than Eddie, who seemed far more one dimensional (at least in his early days in the suit/symbiote).

I know what you mean about Harley and Gwen, but hey, they're selling. Harley I give a shot because I like the creative team on her and got to meet them at SDCC last year. Gwen...I'm iffy about. Gwenpool seems too much of a mashup of two overexposed characters, but the synopsis of her thinking she's in a videogame, is rather interesting to me. It's almost a reverse of Deadpool being self aware of being in a comic.

Should really be another option on the poll since I don't see him as black or not black, since he's bi-racial. Plus saying someone isn't "black enough" is rather racist.