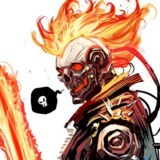 Introducing the jade slayer, the maker of widows, the collector, the beast of vengeance, the supreme warlord of china...General Kai!

First, the story of Kai

The video explains his

As seen above, Kai can take the chi of his opponents and turn them into Jade summons.

He can, by proxy, see and speak through his summons

The Jombies were enough to stalemate the furious five and shifu

Keep in mind, all of these jombies were great warriors, and in fact each are masters of kung fu styles, before being sealed by Kai

Seriously this guy has accuracy, power, and mobility.

Kai is able to accurately attack Oogway, on another platform, that is over a football field's length away

And his mobility largely comes from his jumping power, then aided by his chained daggers

The first gif also demonstrates his enormous cutting power. He slices through a building sized rock with easy.

And in the second gif, upon landing he crushes another enormous rock.

(but I will admit the spirit world is a little...floaty? Not Kai and Oogway, but gravity was obviously affecting the platforms differently. It doesn't diminish his jumping feats there but it is something to consider)

This is by far Kai's best stat. Seriously the guy is a damage sponge. In Kung Fu Panda 3, Kai tanked all of what the fearsome five, shifu, and Oogway could dish-out. Only being defeated by Dragon Warrior Po (Il add Kai wasn't beaten by attacks, instead he was overloaded with power and it's too much to handle trope)

Noctis Lucis Caelum, the crown prince of Lucis. Noct is the main protaignist of Final Fantasy 15. This respect thread is a composite of all his CGI and Animated feats (FF15 and the unreleased FF13 Versus)

Both Robin's criminal alter-ego and the unknown thief who stole Robins suit, this respect thread will use composite feats of both under the Red X persona. A versatile high street teambuster, Red X was swift, devious, and ruthless when in a fight.

Doji Kodama, the 29 year old muscle-brained mafioso hit-man/ bodyguard in the manga Black Joke. He is efficient and deadly, but simple and likable. Well likeable when he doesnt have your blood smeared across his fists.

Introducing the one and only...

His special gun to accommodate his large fingers

Rips a crooked cops spine out (warning a little gory)

Launches a person several feet in the air with one punch

Cracks concrete with a stomp

Stands tall while others around him are flung by the explosion

Too many instances. I'll just post one that is pretty badass and self explanatory