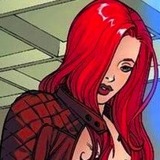 The Sangria Bacterium is one of an ancient bacteria thought to be extinct but was rediscovered by Dr. Delacroix. The bacterium infected the biochemist giving her immunity to disease but also the ability biomanipulation. Sangria can metabolize nearly everything she ingests, though the denser the material, the more time it will take to fully digest into her system. She can synthesize her own blood into various chemicals which can either heal or injure. She often will secrete these chemicals through her lips and nails giving them a naturally blood red hue. The bacterium itself can switch hosts through blood contact or infect to reproduce itself in another organism. However, many organisms will fight off the foreign DNA. Mutants are specifically immune to possession by the bacterium. Sangria seeks to facilitate it's reproduction through the humanoid species.

The Sangria Bacterium was an ancient species discovered by Dr. Janus Delacroix. The Bacteria infected her body and took over her consciousness to use as a host. Quickly adopting humanoid consciousness, the bacteria discovered that certain vices give her an advantage over the human populace. Given her abilities to synthesize her own unique cocktail, Sangria became a drug lord. Despite her notoriety, she managed to gain the affection of the Commissioner of Gothic City, Kurt Pendragon. She manipulated him, exploiting his vulnerability, and using his power to her advantage. She teamed up with a synthetic mutate by the name of Queen Cobra to expand her reach within the criminal underworld. Cobra's niche was prostitution. Sangria's hold over Kurt was shaken by the introduction of Cobra's adopted daughter Xia. The reptilian girl convinced Kurt to help her shut down the operation of the Vixens of Vice, employing the services of Scorn to arrest Cobra. Sangria however could not merely be contained. Kurt used programmed nannies to expel the Sangria Bacteria from Dr. Delacroix's body, effectively killing Sangria Prime.

There were other citizens of Gothic who had been infected by Sangria (Satine, Golden Girl), but the blow was devastating. The remaining hosts scattered out of Gothic to avoid detection.

"It's you that's coursing through my veins."

"Don't need no drugs, you're my chemical. Now I'm dependent, swear I'm clinical. Addicted to those glances, taking chances tonight. I need a fix in those heroin eyes."