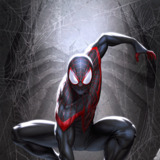 Over the years, there have been characters that make you think: "What were the writers thinking?" " Did they even think about what they were writing, or how it sounded when read out loud. Some characcters are or sound just plain stupid. Some examples are: Man-Spider, the spider bitten by a radioactive man, Spider-Ham, spider bitten by a radioactive pig, or Phone Ranger, the guy looks like a walking phone. The list could go on and on. i realize that allot of comic book characters don't make sense, But, at least they're somewhat believable. I guess the dumb characters are just there for comic relief, or to give the other characters something to make fun of. Another example, Paste-Pot Pete.