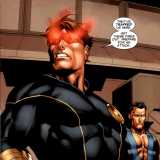 
Which do you like more about comic-related websites, news or content? You have a mix of both here, but some sites are strictly news while others are strictly content. Which do you prefer?
Start the Conversation

In your opinion what do you believe the best lineup for a Defenders team would be? While the early years had a power-stacked team the cast evolved to toward less titanic characters, even going into the very obscure as the series came to an end. Between Doctor Strange and the Son of Satan there was a magic user for the bulk of the title's run and a lot of mystical storylines. Valkyrie was the longest standing member lasting from issue #4 to the first series end at #152. Maybe there are other Marvel characters you believe would fit the team's style. Some say the Secret Avengers cast would make a great Defenders team. What say you?