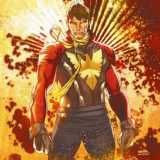 Your top 10 most powerful super-villains of all time.

What super-villains are part of your top 10 most powerful villains in comics, NOTE pre crisis or pre-retcon villains are allowed in your top, only if you choose to add them. Your can base your picks on intelligence and feats, also past villains now heroes or neutrals can also be added to your list, also characters with power items and additional power are also allowed. Who in your opinion are the top 10 most powerful supervillains:

I just can't believe what I was seeing just a few moments ago, 3 of my threads pinned, the Ways and Ideas to improve the vine, the Where is this from thread and the Where should I start thread , I guess this blog goes to you thank you for posting in them, thank you for supporting my ideas through using them and thank you mods for pinning them.

I thought of all those bio forum threads where people post their bios and want to see what reaction the others have.
So I've decided to make this blog to end them all, people can give advices and critics to one's bio. Just post your bio and let the the other talk if it is good or not.

Which of your characters other than your main do you enjoy most?

Which of the RPG characters you have created other than your main character do you enjoy most? Whether we are talking about personality, powers or simply the relationships he has with other characters.

Marvel is bringing Crossgen back into the world of comics, looks like the Disney deal is finally paying off, because at the 2010 Comic Con, Marvel showed a image of Crossgen and one of what could be the future for Crossgen, but unfortunately we will have to wait a year for this, because there was a year in the second image, 2011.
Makes me wonder what else Disney has planned for Marvel, but enough about that, what characters would you like to see in the Marvel Universe? Would you like to see Crossgen characters in the Marvel Universe?

What is the most powerful RPG character you have created?

I will say Michael the Fly, mostly because he is my only RPG character, well for now, but what about you? I know some of you guys have a quite a few RPG character, which of the is the most powerful?

Inspired by the following  pages on the side DC Geniuses and Marvel Geniuses, I want to know who are the smartest and intelligent RPG characters (not RPGers or RPers) in the history of the "Vineverse"?

What characters would you like to join the Hand during Daredevil's reign?