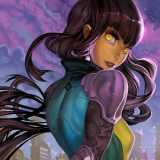 Tim Seeley's Bloodstrike is one of the most underrated stories and teams . Blloodstrike was created by Rob Liefield in the early 90s, a team of reanimated nu-gene active humans and went into oblivion as the "EXTREME IMAGE " ERA faded away. when Tim seeley came on board he revitalized this concept and built upon it. I wish hsi concept and this team would have continued. here are the characters:

deadlock: originally a poor wolverine rip off, but reimagined as an reanimated assassin with ferocity, clawed hands and the ability of invisibility.

Tag: originally with the ability to touch and freeze people , she was reimagined as a deadly superspeedster

These character power sets and costume designs as well as being reanimated blackop government assassins , should have made this comic revitalization a great mainstay.

what are your thoughts?

What are your top TWO x-force incarnations and WHY?

This team is my all time favorite because of the power sets of the characters:

deadpools immortality with his lethal skills

fantomex: misdirection and EVA and his many brains and physiology

@green_tea: really? I sort of preferred xmen over End game. I sort of like the killing off of characters as it brought a sense of urgency and doom that the story needed. Endgame for me was to me a bit lack luster

I started to red red hood and the outlaws with the team consisting of Red hood, bizarro and Artemis.

I thought this was an amazing team concept as it’s a good alternative of DCs Big Three (Superman, Batman. And Wonder Woman).

Here is why I think it was an amazing concept and team.

Red hood- his violent outlook on life compliments the rest of the teams overly aggressive outlook. His complicated and painful history makes and interesting assassin cast makes for great side stories.

Artemis- I just always loved her as a character but now with her axe she is on another level of awesome. Also , anytime an Amazon is on a team it’s cool.

Bizarro- I never thought I would ever see the day I thought bizarro added to making a team cool but somehow he does in this team up. His loyalty and nativity makes readers have great compassion and empathy for bizarro troubled character and child like mind. However, I think he became even more awesome when his mind was altered to become a super genius.

But overall this team of outlaws to me was the best and I was glued to every story.

What do you think ?

Despite all hose who don’t like Greg lands art, I will purchase any comic he is the artist. Tracing or not, his story layouts are nice and I love the realistic feel he brings to his comics. Art is definitely subjective so many will no toile his or others arts while others will.

yes and im happy. i never liked her conversion to a vampire story plot

I LOVE Thor! He is my second favorite marvel character after Black Panther. But ive had a problem really adjusting to Thors Uru arm. Now its gold!!!! I dont like thor with an artificial arm at all but the gold for some reason sticks out like a sore thumb to me.

what are your thoughts?

Who would win between these two teams if mr terrific has been monitoring the fantastic four through a dimensional rift and assessing them. Reed had identified that they were being assessed but was unable to locate or identify who it was.

Mr terrific rallies the Terrifics to engage the FF to see how well they would do against a powerful opponent with prep and how well they work as team and following a plan.

They enter the rift and appear in the Baxter Building before a surprised Fantastic four and the battle begins.

who would win and why?

Metamorpho: element transmorph with the ability to turn into anything on the periodic table

Phantom girl: intangibility and current ability to cause things to explode through contact upon materializing