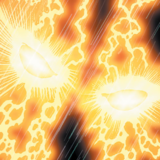 In Brightest day , In Blackest night no troll shall escape my sight , beware my Rustling light

Flash trips and murders himself due to jobber aura.

Seriously tho, WW can't tag him and Flash can't hurt her unless he uses his phasing, but he never used it as an attack.

There are some misinpriterations here and out of context scans.

Lifting strength is irrelevant when it comes to striking power. Maybe they cannot lift planets, but they have planetbusting punches, which Superman cannot do, in fact if you are at least Beerus' lvl you can bust planets via punches and kicks(and he has feats to back that up).

Shazam is not as strong and durable as Superman based on feats.

By feats, Shazam can tank attacks from universe busters like Unbound Spectre, and Skyfathers like Aton, so let's not talk about feats. I can post feats of durability showing that he is as durable, or even more durable than Superman.

Tanks a lightning amped strike without getting really harmed from very pissed of Black Adam, while having 1/3 of power(thus basically at his weakest).

Is durable enough to walk through 5D magic.

While only having 1/3 of his power ,broken + his powers being damepened by Blaze he was still durable enough to tanks hits from JLA(WW and etc...)

In his first fight against Black Adam, was totally unhurt by his attacks.

Tanks hits and energy attacks from Unbound Spectre(a legit universe buster). The most impressive thing is that in their battle Spectre was draining CM from his magical energy, thus making far less durable, but still durable enough to tank his attacks, also most of their fight was off-panel, we only get to see only the end of it, where Cap had only a small fraction of his magical energy, thus almost having weak durability.

In their second fight, he was durable enough to tank his attack, without too much damage.

A battle between Spectre and CM from another angle.

Is durable enough to tank hits from Eclipso-Superman without any damage(Eclipso also amps the strength and durability of the ones whom he possessess can post scans to back that up).

As for strength he has feats and handbooks to back up that he is as strong as Superman.

According to handbook, without magical aspect of CM, he is evenly matched with Superman.

By Superman's own words they are equals.

They had various armwrestles which ended up in stalemate.

Is strong enough to stalemate Lobo, who is as strong as Superman.

Since Post Crisis until these days Superman has better feats than Shazam.

Feats are not everything, when character fights other one, in this case when Superman and Marvel fight it mostly ends in stalemate. And Shazam by himself has insane feats some of them even trump Superman's. For example, BA has better feats than Superman, but against Shazam it is a clear stalemate between them.

Feats don't really mean that much as i said already, and writer already said that Cap can match Flash, deal with it.

As for feats, Shazam consistently has shown that he can fly faster than light, and break time barrier.

WW is not FTL in travel, Shazam is.

WW is not fast enough to enter 5 Dimension, Shazam is.

WW is not fast enough to keep us with Flash and call him slowpoke.

In Flash One Million, a future CM Jr. was fast enough to keep up with him.

CM has show that he can even travel through time via speed.

and he does not have better strength and durability feats than her either.

@mazeraiii: I know but isn't Doom the first one who found out about the Beyonders and their plan to destroy the Multiverse. And Doom has done and seen things Reed never did. Doom also has knowlege in magic witch is the thing Reed doesn't even believe in.

And? Read latest Secret Wars, in the end it was Reed who is the smartest.

With prep and help of Molecule Man and Dr. Strange.