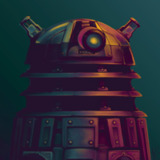 "It's MY mind over YOUR matter, PLEBEIAN."

"The Shell" refers to one of Dr. Morana's most ambitious inventions yet. The conclusion to what he begun with his Life Support Brain Dome, The Shell is the weapons variant of what his brain is actually stored in, and serves as a deadly vehicle for someone in Morana's current state.

The overall design is an odd one, resembling something akin to a pepper shaker. Of course, this "silly" appearance only enhances The Shell's deadly function, as many are disarmed by the sight of it, only to discover that it is indeed a lethal super weapon.

The Shell is made entirely out of a Adamantium titanium composite, and is incredibly heavy and nigh indestructible as a result. Everything from a tank shell and below is rendered almost useless against The Shell's exterior, and is further deterred by the vehicle's elaborate Ray Shield component that covers it's surface.

The interior of The Shell is an intricate housing unit for Dr. Morana's brain itself, placed inside of a gyroscopic vat that is hardwired into the rest of the machine's functions, giving him complete and perfect control of all systems. The Serum (Yet another creation of Morana's) is what fills the vat, keeping what's left of the doctor in a perfectly preserved state. He does not require sustenance, nor rest, as his brain is technically undead. This also allows him to take a serious amount of abuse and damage, as The Serum is capable of mending organic damages through crude mutation.

The shell itself is a host of a multitude of technology and gadgets that Morana constantly upgrades and replaces as the situation demands. The constant weapon in The Shell's employee is the simply named "Death Ray." This ray gun fires a beam of refined energy, that has devastating results depending on the adjusted frequency it's currently tuned at. When it comes to organic life, the beam fires of an organism's pain receptors to the highest degree, inducing unimaginable agony for whoever is struck with the beam. For most, this shock results in instant death, as the shock destroys higher brain function after a moment and stops a human heart instantly. Should the victim be more durable, this still induces a pain that is almost guaranteed to render them unconscious.

For the inorganic, the beam can be focused to utterly decimate solid matter, fully capable of penetrating, even shredding, reinforced titanium with little effort. It's worth noting that this is also possible for organic matter, Dr. Morana just simply chooses to cause pain instead.

The orbs located on the "skirt" of The Shell are often loaded with interchangeable weapons and devices, opening to reveal what's inside. A common tool seen are a set of retractable and flexible "tentacles" that are made of reinforced poly-titanium. These are mostly used for handling objects and acting as Morana's hands, but they can very much be used to lethal effect as well.