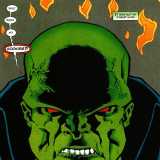 @pikahyper: @exile_616: I can see the point of a separate entry with someone like the Flash, where there is more than one, popular and distinct character, but I would argue that Hawkman has always been a single character, like Superman, just with a less consistent background. Thor is perhaps a better example, with a handful of distinct secret identities and even a few "mantle-carriers" like Eric Masterson. Again, the continuity isn't as smooth, but there has never really been multiple, valid "Hawkmen" running around at the same time; it's always more of a new creators spin on a basic idea. Not to mention Geoff Johns work in JSA to provide a common thread.

@avenging_x_bolt: Frank Diabolu is the proprietor of the finest MMh blog on the interwebs, idol-head.blogspot.com.

I was assuming from your deep knowledge of obscure MMh villains you had to be him. Glad to know there are more than two of us out there :)

The Human Flame gets my vote, because he's such a great foil to Detective John Jones, the worst of human banalities. The InHuman Flame upgrade fits well with how J'onn got powered up in later years, as well as showing the Flames decided lack of sense.

I dig Scorch more as a femme fatale love interest than a straight up villain, especially since with her motivation J'onn's most effective strategy proved to be simply understanding.

Fernus has a cool look and an interesting twist on the whole "evil martian" thing that is often used for MMh villains. Almost too powerful to be recurring though.

As much as I love JLTF, the whole Aryan/Freemen Zeitgeist is a little lost on me.

Naw, too strong a character to be dedicated to J'onn, and much more interesting as an anti-hero.

Even though he's a GL villain, I'm okay with he and J'onn tussling every now and again.

Was this Frank? Cuz this is a deep cut.

Gotta be Frank. Was this dude even fire based?

Not sure where else to put this, The Shadow Mini-series Collection is listed as issue 0 of the mini-series. Shouldn't it be it's own volume?

Turok 0 seems to be a dupe of This issue, with a non sequitur cover, to boot.

@deadpool: I've always thought of his array of powers being due to his shape-shifting; he can 'copy' the powers of many races, Kryptonians included. I rather like him as a thinking man's Superman.

JLI and JLTF both. And JL Detroit for a bit.

@kansas_cyclone: Atlas is a strong mythological being, known for carrying the world on his back.

The other main Silver Age nickname was "the Sleuth from Outer Space."