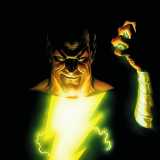 If I were given the opportunity to re-launch the DCEU, this is how I would do it:

Match the appropriate Marvel U (comics) team to each DC team on this list.

Try and match the Marvel team which best can meet each DC team on this list, according to numbers, power distribution/scale, and experience.

When in doubt, choose most representative roster of each team.

ATT!! This is NOT a versus post, but if you feel so inclined...

Supermen of the Multiverse

Young Adult heroes join the Fellowship of the Ring

A group of Young Adult heroes/characters from different franchises are transported to Middle Earth and eventually join the Fellowship of the Ring, shortly after it departs Rivendell.

How does their presence (as well as their individual skills, abilities, and overall experience) improve or hinder the odds of success of the quest undertaken by Frodo and Company?

Take into account some of these characters have previous knowledge of the happenings in Middle Earth, having read the books, or seen the films, or both. Whilst others have never heard of Arda, Middle Earth, the War or the Ring, or Tolkien in their lives.

These are the heroes translocated to Arda against their wish:

I believe a truly amazing and epic relaunch of the cinematic Superman franchise could be achieved by mixing the three most significant origin tales of the character ever published. Namely: The Man of Steel (John Byrne), Superman: Birthright (Mark Waid), and Superman: Secret Origin (Geoff Johns).

plus a few others, such as: