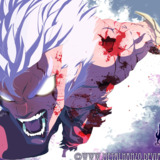 People do not lack strength, they lack will. 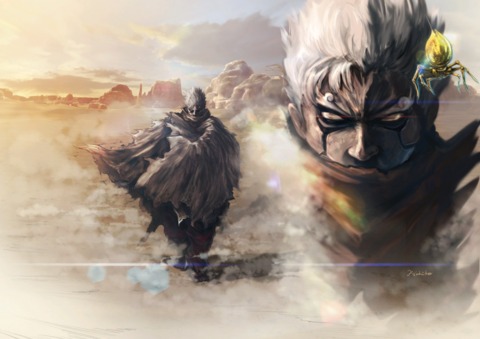 Alias(s): Man of Ten Billion Souls, God of will.

The legend of the Man of Ten Billion souls holds that there was at one point a planet with highly advanced, deeply spiritual race who lived isolated and to themselves within a distant solar system, far off into a thought to be uninhabited corner of the Andromeda Galaxy. They had foreseen that a cosmic horror approached their world, threatening it with utter destruction, or potentially far worse.

There is however, argument over the true nature of this legend, theories made by people who'd managed to find remnants of their society scattered about what was left of the solar system. The only true way it seems, would be to find the man, if they ever could.

However, the Man of Ten Billion Souls is an enigmatic and nomadic figure, often traveling between worlds and seemingly only revealing the true nature of his power to those in need.

Manipulation of the Aether

Ultimately, with what has been observed throughout the universe, it is clear that there are different types of esoteric energies present within that not all races are aware of and can utilize. Thing people of earth call "Qi, Mantra, Life force, Psionic energy, Aura, Chakra, Mana, Zero-point energy" and many, many more discovered by them and other races. In turn, these vast energies all seem to serve numerous purposes throughout the universe, and with advanced knowledge of "magic" and "Science" (though, the race did not distinguish between the two) they were able to be studied, harnessed, manipulated and applied.

The Man of Ten Billion souls represents the ability to utilize some of these energies and use in conjunction with various energies found on the physical plane, such as light, and also apply in numerous ways.

Power of the Soul.

The man of ten thousand souls, when calm, has the ability to manipulate spiritual Qi (as well as physical Qi), Chakra and various forms of Astral energy. This enables the man of ten Thousand souls to combat entities and beings who are not of the "physical" plane of existence, with him able to this on the scale of planets and even solar systems. However, this does come at the cost of weakening him due to the energy required to extend his range this much.

However, it is difficult if not impossible for him to outright, control the energy of another being without their consent. He can't forcefully control another beings soul or life force when it is anchored to a body, and he can only really combat entities purely of this plane of existence. As such, he cannot prevent people from entering the afterlife himself due to divine forces that claim control of these individuals, unless they are in a "boundless" state in which any entity can freely manipulate them.

However, there are some beings with the ability to manifest various types of spiritual energies on the physical plane. While he ultimately cannot do this, if someone else does, he can manipulate and defend against it. Even something such as hell or holy fire can be manipulated to a degree and defended against, simply because of their nature.

The man of Ten Billion Souls has an extremely strong force of will, one that disallows him from being mentally dominated and gives him seemingly unending endurance. His tolerance to pain, which he feels like any other being, seems to be unending. He will continue fighting even missing limbs to the fullest extent of his ability, and strives forward towards whatever chance there may be.

He however seems to be susceptible to types of psionic energy that do not directly dominate him, such as illusions, but even these can be combated the more calm he is, and the more he sees things clearly.

The ability to control one's own body and mind. When calm, he is able to control the very matter of his own body and his own mental state. He struggles with controlling himself completely like many beings do, as he cannot simply will himself to be happy or calm. However, the calmer he is, the more control he has over his own body due to it's own nature.

Draconius' anger can work in his advantage when used in conjunction with "passion" but ultimately, if he simply does something like pick a fight because of something as trivial as pride, then his power in actuality will decrease because he will simply lack the drive to increase it further. Such vanity subconsciously removes portion of his will. Not only this, but being angry removes or weakens several of his abilities. Such as the ability to percieve life force and aura. Naturally he also loses control of life force and chakra.

However, his strength can vastly increase depending on the reason of "why" he is actually fighting. If it is for something that has little true meaning or essentially, something to fuel his willpower, he won't become as powerful. If he does, his own soul and the souls of those who agree will serve to give him massive amounts of strength and damage control.

Possesses this to an extent of possessing cosmic awareness. Generally, he is very aware of imbalances occurring in the universe, and the presence of malevolent entities, particularly on the spiritual plane. Not only this, but he is capable of generally large gatherings of energy. Such as in beings, in machines such as fleets of starships and much more

The nature of Draconius' body seems to incorporate something that is both "flesh" and technology. There seems to be very little to distinguish the two as they are both seemlessly integrated into his body. He has cells and seemingly circuitry, all composed of a form of programmable matter seemingly manipulated by the various Aetheric energies his body harnesses.

A device that channels the various Aethers of the universe and contains the ten billion souls that are used to contain this. It seems to run perpetually, siphoning from ambient Aether of the universe through the billions of souls within, channeling it into actual useful amounts of power to sustain Draconius.

The man of ten thousand souls has wildly varying levels of strength, though the most prominent is the ability to lift in excess of a hundred tons and strike well into what many speculate to be the thousands. He generally easily tosses around star ships in his base form and casually kicks away objects comparable in size and mass to an automobile like one would kick a small trashcan.

Can run at up to 600 miles per hour steadily and dash in quick bursts of speed.

He is very durable, but his strength often fools his opponents into believing him to be more durable than he actually is. He can be pierced by superhuman amounts of force (Whether applied by an actual superhuman or by weaponry), and has a durability in actuality comparison to very thick slab of very high quality steel when it comes to impacts.

However, he seems to have a very high tolerance to energy attacks, able to being being blasted repeatedly, lasers, and even being within the vicinity of nuclear level explosions.

Ultimately, kinetic based weapons and true "particle beams" (as in, relativistic in speed) are the most effective means of harming him.

Not only is Draconius immune to all forms of ordinary disease, but he is immune to drugs, aging, acid, bases and all the like because of the fact that his body does not undergo chemical reactions. The valence electrons of the outer orbit of his atoms simply do not move because the forces of his body hold them in place. Though, this hold can be shaken if he is first weakened, his physiology renders most forms of microbes unable to afflict his body significantly. This also extends to radiation, although extreme amounts (such as that found within the sun, ground zero of a nuclear explosion)

A defense in the form of markings engraved on his body, these actually serve to gift his body with defenses against unseen forces. It defends against nearly all forms of magic and various manipulations some beings seem to hold over some forces over the universe, and prevents them from being applied directly to his body. This is his first line of defense against things such as psionic attack, telekinesis (or any kinesis) of his body or anything to do with manipulating his own spiritual energy and forces. If the ward is intact, hellfire is unable to harm him.