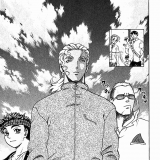 The alarm clock rang shrilly. I was still so tired. Covering myself with a pillow, i tried to diminisish the noise level. To no avail, I woke up and walk to the toilet, feeling irritated.  I looked at myself, for the first time in my life, I realised that my eyes were brown. I sighed as I brushed my teeth. After which, I turned on my pc as I logged on to facebook. "Reyyyyy, do you realise what time is it now, you have to go now or you will be late".

Reluctantly,i close my pc,grabbed my bag and my ipod touch before rushing down. Grabbing a slice of bread, i yelled ,"Bye,mom". Plugging in the earplugs, the music begin to soothed me as i thought of the boring schoolday ahead. If only life would get more interesting,not as dull. Needless to say, my life was cursed to be changed entirely that day. As i entered highschool, my old gang(andy,vance,peter,scott)all started waving at me.

"Yo,rey!".The school was full of familiar faces, rachel,the school hottie, joseph the practical joker of the class,terry the football guy,jeremy,another school cool guy. "No one understands me here"i thought as I nonchantly shrugged and smiled fakely. "Hey,rey,did you finish your homework?" andy asked as i shook my head as usual. "You are so going to be dead,rey,she said whoever does not hand up their assessment will be given a demerit point and punished" joseph joked, with a smug on his face. In a dronous,monotonous voice," hey,whatever,it 's not the first time anyway,who cares". Jeremy and i started conversing with me about the final crisis series,yeah,it was kinda cool,barry allen came back from the dead.

The bell rang as we all rushed to class. Mr (insert any name here) begin droning on as usual as my eyebags drooped and slowly closed. "REY,What the hell are you doing,you are sleeping in my class, You are hopeless,i don't even know what to do with you. "Yeah,yeah,yeah"just give me detention or whatever. "Not this time,REY,YOU ARE GOING TO THE PRINCIPAL OFFICE RIGHT NOW"The class broke out in whispers as i slowly strolled outside,leaving mr ???fuming. I yawned as i approached the principal office. "Well,well,well,rey the popular jester in school,what happened againnnnnnnnnnnnnnnnnnnnnnnnnnnnnnnnnnnnnnnnn".

"Nothing much,i was just sleeping in class"i replied irratingly. "I am afraid that you will have to go through detention again,sigh,sometimes,rey you just give me a big headache,why can't you just concentrate" he said as he passed me the detention slip. I walked out of the principal's office as i looked at my watch. It had been a present from my father at my 10th year old birthday. He had vanished all of a sudden 5 years ago. It was tough for the whole family but we managed it. I realised that it was 10:00am,reccess time. A grin overcame my face as i ran to the soccer field.

"Hey,wimps,get outta the soccer field" jerry bellowed at us.
I instantly recognised that it was the dreadnaught's gang.The argument soon escalated info a fight.
"Hey,stop fightning,jerry,let's settle this with a soccer match,you on? "i yelled.
The look of astonishment on jerry's face was soon replaced with a smug grin.
"OK"he replied.
"5 people against 5 people,jerry,tim,sean,nigel,eugene vs me(rey),vance,andy,peter scott. Buckshot will be the referree".

"MATCH START!'Dribbling the ball,jerry soon ran all to cut me off."HAH,fat ass"as i easily turned to avoid him. I swerve and kicked the ball,time seemed to slow down to a crawl as the ball approached the goalkeeper."YES,I SCORED".Disgraced,the dreadnaught gang embarrassed,walked away with their heads down.
"Hey,dreadnaught gang,you are welcome to join always".
Jerry smiled at me,saying,"maybe,next time".

I woke up,tied to a seat(well not really woke up,someone splashed water on my face). "WHAT THE F*** HAPPENED"i said calmly. "Woah,where the hell am i and why are there blue dwarfs?'

"Rey,we are not blue dwarfs,we are the guardians of the universe,a team dedicated to keeping the universe in order and my name is ganthet,we have decided that you have great willpower and the ability to overcome fear,you will be the first human green lantern and you will get this ring"

I took the power ring from ganthet and put it on my finger,my appearance was immediately transformed............


"Your  ring requires charging by reciting a oath for  a minute every 24 hours,rey,this ring will be yours unless you abuse it,you can charge now"a gleam was in his eyes as i looked,i prayed that i would never get a chance to know what he meant.

Touching the battery,i decided  to recite an oath to pass time.

"In darkest days,in bleakest days
Through hope and faith can we end despair
Let those who spread despair and blight
Feel the power of hope,our might"

The ring glowed  ,finally in my life i had a mission.....

As i flew back to space in space, i contemplated how weird my life had turned out recently. My life was upside-down as i thought of how I would manage my life and divide my duties between my green-lantern duty and my hectic school life. Well,i did not have much time to think before a yellow guy burst onto the scene.
"So, you are the only human green lantern show me what you got"he yelled as he fired bolts of yellow energy towards me. As i struggled to defend myself,i found that my power ring did not work on yellow. Dodging barely out of the way, he gave me no rest as he bombarded me with yellow bursts of energy. Gritting my teeth, i fought to keep myself alive as i manipulated the nearby meteors to attack him. Merely creating a forcefield to shrugged it off, he laughed at me .It was one of the first time i faced fear as i put up a great fight.

Slowly,i found myself overwhelmed by his attacks. My power ring energy level was approaching dangerous levels as his power ring glowed even brighter. It all dawned on me that he was absorbing my attacks all along. In a last d!tch attempt, i teleported behind him,pining him in a wresting lock. His ring glowed as it all exploded.......

I woke up alone in the desert........who am i,where did i live. The questions ravaged my mind as a splitting headache cursed me. As i looked at my hands, I saw my green lantern power ring, I wondered what it was as the memories of my previous life seem to struggle to burst out.  The dryness of my throat hurt me as i envisioned water. What was water, i asked myself as my green lantern power ring transmuted part of the sand into water. Instinctively, I dipped my head into the water, drinking down the water as fast as i could. The liquid restored strength to my limbs as I stood up, amazed at what my ring could do. Concentrating, i tried to make the ring repeat the same trick again. It was as if the ring was a living extensive of my mind as it transmuted the sand into water. I gasped, slightly awed. Willing my ring to teleport me back to new york city, the big apple,  I looked at sinestro, the memory rushed out, overwhelming me as i squatted down, clutching my head as it coursed with pain. Standing up, i regained my memories as i flew at sinestro and engaged him in battle. It just had to occur this moment, why thor?why thor?why thor??????


Sinestro, saw thor flying towards him, it was child play's as he manipulated thor's mind into thinking that it was ME who caused the damage.

Thoe said"thee did this" as he looked at the damage to new york city, sinestro formed a yellow bubble around him as he conjured up popcorn and started eating them. Thor flew at me as i formed defences after defences. Thor started hitting the forcefields with all his strength with mjolnir. However, he could not even dent it as he conjured up a portal and dissapeared. I was shocked as i looked around. Looking back, i found thor behind me as i whipped up a feeble forcefield to protect myself.


I held my injured arm, my expression full of pain.
"stay your hand or incur the wrath of the god of thunder and son of odin"he said
My eyes glowed brightly as anger overcame me. I wanted to kill him, to rip him into shreds, see his blood flow. It was over the time for fun and games. As thor brought down mljnoir on me, I created a forcefield which could hold a supernova. His face was full of shock as he looked at me, the forcefield was hardly even dented. I launched everything i had as I send forcefields, constructs attacking him. Yet, he would not fall, I couldn't help but admire his courage,power as I launced my final attack and put him down barely.

I look at thor's unconscious form as I flew off. Sinestro is so gonna pay for this as I clutch my broken arm. As i made a bandage over it, I flew off back to home.


Ability to create constructs-Able to contain a supernova or a blackhole,the upperlimits have never been explored yet
Shield-The power ring is able to create shields to protect its user when unconscious
Force-field-can protect wearer from attacks even those of superman or shazam
Matter manipulation-Can transmute matter into other matter such as bullets into water
Invisibility-Rey can make himself, other people or things invisible by diverting light waves from it. However, his enemies can still grope around and touch the object.