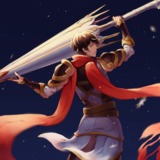 Find something better to do with your miserable life.

Phasing won’t work on Kryptonians. Their power is stored in their cells and not their skin. They are more durable than Vibranium by feats let alone a composite like Vision.

Round 1 goes to Thor. Gets stomped in the rest.

It works both ways. Thor isn’t the only character with ridiculous feats, but at the end of the day, people would always pick their fav character and cry foul when their character losses.

I mean even a simple thread like this has the OP misrepresented some of the feats that happened on screen, a classic example of bias.

Thor can have all the feats and statements he wants as long as his opponents get the same treatment (something that never happens which leads to threads like these). That’s my honest opinion

Highly overrated since most of the people using the feat deliberately choose to ignore any context whatsoever.

TP obviously. Bending people to my will is more fun. But in an actual fight, going with speed all day.

Clarks easily in both high-ends, average showings and consistency

Gonna have to start reading it then. Will it be on netflix?

why take away the sword though, biased much?

Nam-Ek easily. Why do people keep bringing up the meteor feat from IM and make it seem more impressive than it actually is. A weakened SM already busted a more durable metal and Nam-Ek was eating his hits.

If that durable metal scaling held, Superman should have blown Nam-Ek's armor to bits. It seems to take a lot more effort and a good bit of gravity bending to rip the suits apart as shown when Zod unlocks flight in Metropolis. And with high effort Kryptonian bone can go snap. Superman expended all his solar energy against the Engine too so "weakened" scaling is sus :/

As for the durability of said metal, Iron Man actually hit the ground. The engine of the World Engine, the venting head that Superman destroyed, was nowhere near the ground when the Engine crashed. It's like saying a person's head gets a durability feat from jumping on and off the ground.

So your counter argument is that it doesn't follow logic? That won't work otherwise I can just as easily counter all arguments from IM that aren't logical. The suit held up against an onslaught of attacks from SM (punches, bullushes, HV) which places Nam-Ek far above IM. Zod ripped the suits, he didn't punch it, which wouldn't have worked anyway since earlier own the suit was tanking their combined bullrushes easily. The fact that Kryptonians suits weren't blown to bits is a testament of their durability.

Lol, I'm not surprised you would also try to discredit the fact that SM was weakened to the point where he couldn't fly properly and was coughing up a lung. That and the fact that it was earlier on stated an6d proven that Kryptonian atmosphere weakens them. While we're at it I guess I should also mention SM also had to push through the gravity beam (while weakened)?

Dude the WE has far better durability than both IM and the meteor based on the fact that it had a far, far, far bigger mass and we actually have its actual speed and the fact that it was still accelerating towards earth at the moment of impact. The head not being near the ground excuse is something I wouldn't expect any respectable debater to use. Both from an engineering perspective and a physics perspective, can you give any reason why the bulk head of a machine that is designed to ram onto planets and alter their gravity to kryptonian levels would use a weaker material?

Your analogy sucks by the way, the material used to make the bones in your legs is the same for your head. Its the shape that differs since they have different purposes. The legs of the WE are pretty pointy since they are designed for landing while the bulkhead for both defense and the generating the beam. So unless you can prove the bulkhead is made of different material and weaker one at that then you're just grasping at straws.