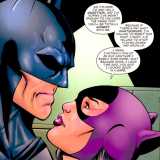 If history shows us, the internet doesn't mean anything at the end of the day.

Tap into the Speedforce! 3

To be perfectly honest, The Flash always felt like one of those comic characters that I knew a lot about due to their (I'll include all of them) endlessly appearances within countless wonderful animated series and movies. However I would be slightly surprised when I picked The Flash: Move Forward Vol 1. and I realised that I did know enough but less that I thought. The Story Or stories, are interesting. They move back between various genres such as science fiction, dsytopia and the superhero ge...

Yes, I just gave an hero whose been hilariously mocked over the years by the public and by some comic fans. But Geoff Johns changes this completely making Arthur Curry aka Aquaman, self-aware and rather sympathetic. In all honestly, I felt connection with Arthur due to him not receiving any respect around him. Anyway....The StoryThe story of Aquaman: The Trench volume 1 feels like a alien invasion story but from the seas much like Pacific Rim or HP Lovecraft story. The monsters from the trench ...

First of all, if you're gonna read this book, don't go in expecting an usual superhero book. This book explores the nature of life, death and rebirth. It also deals and switches the very nature of comic book around from the start. The story The story is somewhat not exactly confusing but the basic premise is that Susan Liden is brutally killed after she discovered while doing undercover work. From here Susan is revived by an scientist into an plant-like woman, but she can't figure who she is or ...

Where to start with this book?! There probably too many adjectives to describe this book: fantastic, wow and awesome. First of all lets talk about the art:Paul Pope's art is something to behold, its a mixture of childish drawings, Jack Kirby's loving hand and Moebius's dash of science-fiction. It even feels like there is also a touch of Dr Seuss.Every image comes alive through the page from the usual colour palette of blues, browns, terracotta red, purple and orange which enters your eyes like a...

Necessary Evil: Super-Villains of DC Comics by lyrafay on November 21, 2013

So last night, I decided to take spin ant Necessary: Super-Villains of DC comics last night and here is what I thought about it.The GoodGreat exploration of what makes the DC comics universe so great, those iconic villains.Great contributors including Bruce Timm, Clancy Brown, Marc Wolfman and Neal AdamsIt really got what to the heart of what all of these villains, you discovered what makes Deathstroke tick to why Flash's rogues work so well together and apart.In case you were wondering, no it d...