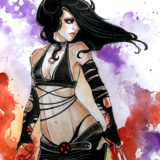 "When I tell you that the last year of my life has been nothing but a raging sea of lies, torture and disappointment...believe it."

Batkevin had me with his word play and Frangipan hooked with the surprise ending but then ImpurestCheese had me all up and interested with her "captivating" protagonists (avec un peau duHitler), followed up with Pyro's anti-happy ending that shocked. You would think that much awesome would be enough, but noooo, 4donkeyjohnson had to do a "wham-bam-thank-you-ma'am" submission that had me grinning. And yet, I got completely submersed in Cbishop's story -- horrified and heart in my throat terror (plus, you know....werewolves...>_>)

I know I sound like a broken record, but seriously, brav-freaking-o, everyone. Hmm'd and haww'd but I am going with @cbishop.

Well done -you all deserve a million comments each for your submissions.

How come Wolverine has more skillz in Nightcrawler Issue 1 than he does in three issues of his own ongoing at the moment? Just saying >_>

I am loving those variants though. <3

This is going to be hilarious. Although, Illyana has to take it down a notch with the intro-pose she has going on there.

**off to get Doop alphabet translator**

1. I want armpits blancmange all over

Looks like a lot of the more interesting characters come from The First who you mentioned are god-like - or seem to think they are. All of them are extremely interesting and it's been a fun read going through your introductions, but I don't think those that originate from The First would be willing to follow Magneto (unless there is a leader already in place?

I know this seems gender biased, lol, but I would really like to know the name of the male character whose powers gain strength in relation to other people's suffering.

It's way too difficult to judge Scott as being gulty of bad leadership, encompassing the entirety of his tenure as one of the X-Men.

Do I think he deserves the position? Sure. Were there times I think he didn't? Yeppers. If I were to balance the pros and cons, I could lean towards not guilty but I'm not going to do that. It's what you do in the present (or recent past) that matters and as a leader, today, he's not doing a very good job. He's getting better though, and that's something that's been standard for the character from the get go -- so I say, GUILTY but if the trial gets delayed by a few months to a year, I wouldn't be surprised to find myself voting not guilty. **fingers crossed**

Father pushed over a cliff to his death by his best friend and mother eaten by wolves? In front of him? O_0 What the...?

Awesome intro is awesome. I usually skim through words by habit but the first sentence slowed me right down and had me digesting every word. Literary whipped cream topping, for sure. I'm giving this book a shot.

There is still angst between them? Hrrrm...

Before I began reading Guardians of the Galaxy (the recent version), I had no idea what the heck any of those characters were outside of maybe a smigdeon of Gamora. I really, really enjoyed the introduction with Peter's father and mother and how they met -- and the whole wiping out of the lineage type idea. I've fallen behind in my reading quite a bit (I only read GoG up until after Angela's introduction), but I can see myself picking up a title with Star-Lord at the helm. Unless things have changed drastically, Peter is the kind of character that gets on my nerves but stops just short of being Tony Stark annoying. Perfect recipe for catching my attention as a fan.

Although seriously, Rocket is getting his own ongoing? I didn't realize how popular the character was. I do know he made an appearance with Gamora way in the beginning with Nova (the new one, Sam) and that was around the same time the Guardian book starting coming.

I did see the trailer before I watched the latest Captain America and there was a whole laid back, scruffy, rag tag type feel to the team. I have no idea if that is how the Guardians are supposed to come off as - and the actor playing Peter comes off a little Harrison Ford-ish to me. Again, that might be what the character is supposed to be like -- I see Star-Lord as a cavalier, smirking but deadly solider/warrior.