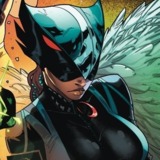 Moon Bird Studios is the film studio recently opened by Luna Hawk, aka Kendra Saunders Hol. Kendra got her start in the film industry by releasing her own sex tape as a means to discredit someone but took to the industry. She was soon on numerous posters (adult and otherwise), in various videos and on many pay per view websites. She continued this trend for sometime before she built a film studio in what is now Grimm City. The studio focused on the development of adult films both for internet and dvd release while each of the actresses that join the studio were protected from bad ex boyfriends, leech like family members and other predators of Grimm City. Rather than keep the girls down, her studio lifted them up, provided education, room and board for free.

Eventually Luna Hawk moved her film studio to LA, where she expanded its operations and eventually founded Moon Bird Studious, a combination of her adult film studio and a new, mainstream studio intent on bringing more traditional films to less traditional media. Using her gold reserves Luna Hawk has purchased a state of the art studio in Hollywood along with all the latest equipment and staff necessary to film a modern major production. She has also purchased a series of Theaters across the country and re-branded them Luna Theaters. Each theater has seventeen screens and exists in every major city across the country.

Moon Bird Studios releases non-traditional format films. They have a deal with every major online streaming service and each of their films is released in theater as well as in the new internet formats that have become so successful for television shows in recent years. She has plans to further expand the business into non-traditional formats in the near future and believes that eventually theaters will either have to evolve or will become a relic of the past, making her investment in theaters a temporary means of providing greater public access to her films.

Luna Hawk prefers movies that combine practical effects with top notch CGI rather than those that rely on over the top CGI. As a result she hires producers and directors who feel the same and her studios are filled with all the necessary equipment to make realistic sets and practical effects. Moon Bird Studios hires expert practical effects personnel who are eager to put their skills to use, directing young men and women hired from the art departments of local universities.

Moon Bird Studios continues Luna Hawk's tradition of taking care of and promoting young women (and men) by providing them with jobs that garner valuable hands on experience for a fair wage. Those in particularly bad economic straights will often find they can do extra work for the studio in exchange for suddenly finding their student loans paid off.

Moon Bird Studios goes out of its way to hire actors and actresses that actually fit their roles. This means the studio ensures that there are no 'white washing' controversies while at the same time does not 're-imagine' classic characters for the sake of appealing to the social justice warriors of the world. There are also no 'mysteriously skinny and impossible' action heroines. If a character is expected to do physical work and be physically capable of beating up bad guys, the actress (or actor) will be expected to undergo significant physical training as well as combat training to better play the role. This also helps to avoid 'that guy never shot a gun in his life' situations where actors and actresses firing weapons in a film have clearly had at leas some experience at the range.

Although the adult film portion of the studio is its own division, the main stream films still frequently push the limits of their ratings as much as they push the limits of special effects and original story writing. Luna Hawk likes to hire directors who will push the boundaries of story telling, try new things and not worry about how many F-bombs are allowed in an R rated movie and so on. This is not to say that every film they produce pushes the boundaries, only that some of them do and it is a risk the studio is willing to take.

Visit if you like, no major destruction, usual rules apply etc etc.

I will be adding to this as I come up with stuff and will hopefully create blogs related to specific movies released by the studio.