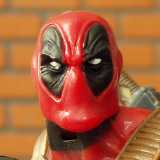 for the review keep scrolling to the bottom
Synopsis

First picture the set and stage, the background always has a bat shape cut out of it and a projection inside and as you enter the stage is filled with a few small buildings and a projection of Gotham City with an orange sky and zeppelins and balloons flying by.
As the time approaches to starting the sky turns blue and buildings in the projection light up and also you see the moon rise.
The music then plays so the audience knows it’s about to start and when the music finishes a security guard walks on stage. After walking around he gets a radio message
and rushes off, then a load of people looking like detectives walk around for a bit while the music plays news clips about batman and some of his rouges gallery ending with the word batman being repeated.

The first real scene is Bruce as a young boy returning after going to see “Zorro” (first Geekasm) where it retells the story of his parents murder.
It then shows Bruce older and with commissioner Gordon at Haly’s Circus where they speak with the flying Graysons, Tony Zucco (second Geekasm) arrives threatening the graysons and leaves after they won‘t pay him. Inside the circus there are a few circus acrobats and  then as dick grayson recites how his parents got together they trapeze, then there are some flashes of light and the graysons fall to their death leaving Dick with Bruce Wayne to look after.

Dick is taken home and after seeing the bat-signal Bruce leaves while Dick talks about Batman to Alfred.
Catwoman then climbs down from the ceiling in an attempt to steal a diamond cat head from Gotham Art Museum but is stopped by batman who is looking for Tony Zucco.
Catwoman then goes to the Iceberg Lounge looking to warn Zucco where after talking with Penguin, Riddler and Two-Face they decide to team up to stop Batman. Zucco arrives injured and Batman smashes through the window fighting the thugs. Zucco then begins to laugh and is killed by Joker Toxin.

Meanwhile Dick goes back to the circus but finds nobody there, he is then attacked by the Joker’s Thugs and is tied up by Harley Quinn and suspended in the air while a box is brought to the stage.
Harley hit’s the floor with her hammer and the Joker is shot out like a jack-in-a-box and bounces a bit in the air, as he is lowered down he tells the audience about his plan to trap batman using Dick.

Opens back up at the circus and Joker explains how he will kill Batman and runs off when he sees police sirens. Batman Arrives and a huge Joker face is revealed with thugs as hair, teeth and eyes and all climb down to confront batman, joker walks out of the tongue of the face and the thugs attack batman, joker threatens to shoot Dick who bites and kicks his way out and hands a stick to batman, they then fight off the thugs together. Joker is left and leaves the circus via a jet pack.

Harley is arrested by commissioner Gordon who tells Bruce Wayne to take Dick home
Batman reveals his identity to Dick and Alfred agrees to train Dick like he did Bruce in the bat cave.
Meanwhile at Arkham Harley is talking to catwoman and the joker blows up the floor and shoots some guards, he then declares that he is taking over Arkham and runs off with Harley.

Batman gets a call from Commissioner Gordon about the event and after looking through some of the villains profiles drives off in the bat mobile. Alfred talks to Dick who wants to help Batman and after hesitation Alfred allows him to go and the Robin costume is lowered from the roof.
There is then a driving sequence on the screen of the bat mobile racing through Gotham and avoiding Joker Trucks.

At Arkham Batman is first confronted by a really Big scarecrow (think of stilts) who fires his fear gas at batman, then poison ivy is lowered from the roof and the thugs including two-face,riddler,penguin and catwoman take batman to joker.
Joker ties batman to two chains and hangs him up but then Robin flies down while catwoman frees him, Robin is being beaten by the thugs until batman steps in, then Batman, Robin and Catwoman fight off the thugs.
Joker then shoots batman and has a  fight with robin catwoman picks up his gun pointing it at joker until Harley Quinn walks in with a bazooka, Joker walks off as Harley talks about him and having “little Clowns” until catwoman points out he has left, as she goes to look for him, the screen opens from the back and Joker is escaping in a hot air balloon, Harley gets pissed off and fires the bazooka at the balloon which fires out sparks and flames as it lands behind screen.
Catwoman kisses batman and walks off as batman talks to robin, they then both leave in the bat mobile.
All the cast then walk back on stage posing for pictures and after all the villains leave, batman and robin run off together.

The Cast may not be great but since it is a theatre production the acting is allowed to be over the top, the colours and costumes where great and look a lot like in the Joel Schumacher films, all the sets and special effects where fantastic and I loved the story and little Geeky bits like “Zorro”.
The only parts I didn’t really like were how the characters would stand on the minature buildings for example when Harley Quinn is in Arkham Asylum she is sitting on a model of the building, I also didn’t like the catwoman fight because it was doen like in the matrix or Hero.
Aside from this the production is really great and is definetly one of, if not, the best I have ever seen.
Highly Recommend it
EAT DAT SPIDERMAN: TURN OFF THE DARK