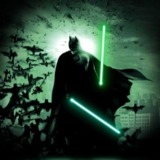 Taking a little break from debating for a couple of weeks

This is going to be a short but concise analysis of why the PT Jedi Master has more raw power than Valkorion. Simply put, I will compare their best feats and then explain why Yarael Poof's feat is easily better and how it surpasses the limitations that Valkorion's feat has here.

Vitiate was capable of draining a planet in around the time of GHW, that is 5000 BBY. However he required the power of 8000 other Sith Lords to do so, as well as an elaborate ritual that took weeks to perform there

Eight thousand Sith Lords gathered on Medriaas and agreed to partake in a ritual that would bind the Sith together as an ultimate dark side weapon.

Even as Valkorion, he needs to consume more and more beings on Ziost to create disturbances in the Force that are powerful enough to allow him to consume the entire planet:

Now this is just conjecture based on my own interpretations, but based on the JK story the ritual to consume the life in the galaxy required 2 things. A certain amount of deaths over a certain time and a huge amount of death in a short time, probably creating a disturbance in the force which Vitiate can use to feed or something.

On Ziost his spirit controls beings and then uses to kill other beings then posses more, it's a cycle until I think it reaches a point where he's able to consume the planet.

This quote was affirmed by Charles Boyd here:

The most noteworthy part about this is that Vitiate needs "disturbances in the force" that result from killing people in order to actually allow him to consume the life on the planet. In other words if the massive disturbance in the force that resulted from Vitiate's actions which involved a cycle of possessing and consuming more and more individuals didn't exist, then he wouldn't be able to consume or drain the life on Ziost.

Thus Vitiate on Ziost is amped by both the nexus of Ziost, which is one of the most powerful dark side nexuses in the entire galaxy, as well as the massive disturbances in the force that result from the cycle of Vitiate possessing and killing individuals there and using those disturbances to fuel his power in order to drain the planet.

Vitiate has to go to such great lengths in order to merely consume the life on the planet and drain its oceans on the surface.

Let us see what Yarael Poof is capable of

The infant of Shaa is an artifact capable of destroying worlds with its raw power and the kind of energy it unleashes is unlike anything the galaxy has ever seen before:

The artifact will unleash such power that Coruscant's destruction would be a beacon visible "from the core worlds to the outer rim" which is a tremendous amount of energy which the artifact is capable of unleashing. Only a supernova has enough raw power to be visible across an entire galaxy as far as cosmic phenomena go, so the artifact being capable of unleashing energy comparable to a supernova speaks a lot for just how powerful it actually is and how containing its energies is easily one of the best showings of raw power in Star Wars as a whole.

But Yarael Poof does manage to contain its energy:

Now taking into account the fact that he was actually fatally stabbed before doing this and it becomes evident just how impressive the feat is here:

There are also multiple quotes directly stating that the artifact had the power to destroy planets thus confirming this objectively and without a doubt:

During this period, the Jedi face the threat of General Khorda, who procures a Force-energized artifact with planet-killing power.

We can see here that Poof manages to "keep the artifact from exploding" meaning he contains its energies which is clearly stated here. We can infer that he uses Tutaminis here since that is the power that allows force users to contain force energies in SW in the lore.

You might argue that Tutaminis and Drain are two different powers but that only makes this feat much more impressive. Tutaminis is a very difficult ability to master and it is far more difficult than telekinesis. With telekinesis, normal Jedi and Sith can easily move huge objects weighing several tons but even absorbing the energy of fire or lightning or lightsaber blades is an incredibly impressive feat for a Jedi or a Sith despite the fact that absorbing fire or lightning doesn't require as much raw power as for eg. moving a ship through tk.

Valkorion on Ziost is amped by the powerful nexus there. Despite that he needs massive disturbances in the force caused by a cycle of feeding and killing people to fuel him in order to consume the life on the planet and its oceans there.

Yarael Poof, while extremely weakened is able to contain the energies that are "unlike anything the galaxy has ever seen" and if released, the destruction of Coruscant would be "visible from the core worlds to the outer rim" showing just how impressive the feat is actually here.

We can clearly see that Valkorion only affects Ziost on a surface level. The energies that Yarael Poof managed to contain however were clearly going to tear the planet apart, which is vastly more impressive. When you consider that the explosion that would have resulted had Yarael Poof not managed to contain the artifact's energies would be visible throughout the galaxy, the question of who has greater raw power becomes pretty clear here.

Even if a person manages to move a planet with tk, the feat is much more impressive than simply affecting it on a surface level. Tearing a planet apart is much more impressive than simply moving it and Yarael Poof was extremely weakened as he contained the energies that would have torn a planet apart. Thus it is evident that Yarael Poof has a greater amount of raw power than Valkorion here.

While Yarael Poof is an extremely powerful Jedi Master he certainly doesn't feature very high in the PT hierarchy. He is canonically inferior to TPM Mace, meaning he is inferior to the likes of Count Dooku, Obi Wan Kenobi and Darth Maul, and far below the likes of ROTS Sidious and Yoda which goes to show just how advanced the PT era actually is and how advanced are the high tiers let alone the top tier force users are there.

Blogs Created:
18 blogs
Most Commented blog:
Why Yarael Poof is above Valkorion in raw power in the force- A brief comparison
Total Comments on blogs:
497 comments