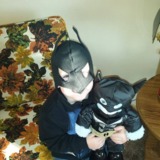 Sharing my opinion and thoughts on my favorite comic book characters, writers, artists and books has never been better!!!

My name is Ryan O'Toole I'm from Illinois but spent most of my life in Wisconsin before moving to Lawton, Oklahoma in December 2012. I had the blessing of meeting my future wife and fiancé Betty here in Oklahoma this past year!!! I have one son named Logan after Wolverine he is 4. I also have 3 step daughters Samantha (8), Jazmine (5) and Stephanie (3). I have been around and read comics since I was born. My father had been collecting his whole life from 1953 to this past 2013 when he passed away. I have a very well developed knowledge when it comes to comic books from Golden Age to Modern Age. I have got to know several different artists and writers that publish amazing stories and art. I also have had the privilege to personally know well known artists and writers threw my father. I stopped reading comics in 2011 to further my career but it has found its way back to me since the passing of my father in December of 2013. I hope to give some great reviews and comments on the comics I read and to read what the rest of the comic book world has to say about them. My father was much more knowledgeable when it came to comics as a whole. I prefer to specialize in Batman books and characters because that has always been my favorite. I 'am looking forward to share my thoughts, ideas and opinions with fellow readers and get feedback from them good or bad!!! Well that about does it for me, hope you all enjoy!!! P.S. PLEASE CHECK OUT MY FACEBOOK PAGE https://www.facebook.com/livefastest13