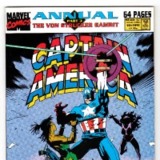 Now I know Bat- Mite is the last character anyone wants to see nowadays, but I think if DC took the right direction with him, he could be a really cool villain.

This has to go, it may have been okay in the 60's but now.... yeah.I guess the magic angle could work in a justice league story with focus on Batman, but then again Batman gets enough action in justice league any way. I don't think magic would really work in the Batman universe, true their have been many successful science fiction based villains (Though those are my least favorite, Bane is about as science fictiony a Bat- Villain should be) but those are still based on a science of some kind and can be explained with a half- assed scientific explanation.

Usually Bat - mite is portrayed as a mischievous imp who just wants to torment batman, and create scenarios for him to over come, but more recently in works such as Batman R.I.P he was been quite menacing. Dc needs to follow this. Perhaps he could be a sadistic little guy who wants to cause batman strife purely for fun, or be a little stalker who wants to set up scenarios for batman to beat, not caring who gets hurt.

I think for Bat- Mite to be successful he needs to be realistic so I had this idea:

Bat- Mite is a crazy Bat- fan, real hard core stalker kind of guy. He's just some nerd who blogs about batman and his villains, he has a huge following of bat fans; his identity is completely secret, the only ID any one has of him, is his profile pic.

He gets the crazy idea of actually arranging scenarios for Batman to over come( Organizing criminal meets, releasing prisoners from Arkahm) Just to get his nerd gasm on.

Bat- Mite should be your average cliche internet addicted no life, cue obesity, acne, and pony tail (Think 'comic book guy') He has next to no self esteem, he doesn't look after himself

If he was to appear in the arkahm series he could be one of those hallucination bosses that I loved in arkahm city, like the Ras Al' Ghul boss fight, or the mad hatter one

Tell me what y'all think.