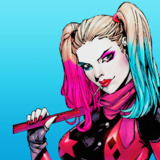 Due to plagiarism information on character will only be available upon request. You can ask on my main account @Feral_Nova

Before Laughlyn, Lynda was a young, bright and enthusiastic science high school teacher. She was popular among the male student body, with young teenage boys trying to always catch her attention, even though she was married to Aaron Nell, a counselor for the high school. Everything was going well in her life. She had a loving husband, a daughter named Jill, a house in the suburbs and a loyal dog named “Giggles” and a great job that she loved. Nothing could go wrong in her life! ...until it did…

Chaos came into her life in the form of senior football quarterback Derek Baye. He had a thing for Mrs. Nell, and would always request to have after school tutoring with her, which she always agreed to. But one day, during tutoring, Derek grasped at her butt as she had her back turned away from him. Apparently Derek took that her staying after school to help with tutoring was her telling him that she wanted to have sex with him. She quickly attempted to correct the situation, but Derek, instead, became angry and spiteful. Making claims that she was flirting with him. Lynda demanded that Derek leave and quickly went home that night, not telling Aaron anything, trying to process what happened.

The next morning, as school was about to begin, she noticed students laughing, gasping and pointing at their phones as they gave amused stares at the teacher. Being called to the principal's office, she walked in, still fully unclear of what was going on. Turning their computer screen over to her, she watched in horror as a picture came up of a shirtless Derek mounting on top of a naked woman's body with the face of her on it. But this wasn't her, she had never done anything like this before, she would never DO something like this! Someone photoshopped her face on that body! She tried to explain what had happened, and the principle already stated that they knew. That Derek had come to them earlier that morning with his parents and made a statement that she had thrown herself onto the student.

Fired from her job, even after being proven falsely accused, no other school district would touch her, or any other job that involved children. The fire caused by this was so bad that her husband filed for a divorce, winning full custody of Jill and forcing her to be alone. With her world falling apart all around her, the stress of everything in her life, overwhelming her, was driving her to insanity. Depression swept in and after being placed on several 5150’s, until one day… just… snapped. Sitting in a hospital bed she came to the realization, she wasn’t going to allow herself to be sad anymore, and she wasn’t going to let anyone make her feel sad anymore. Instead, she was going to get rid of anyone who made her feel like that, permanently.

Laughlyn has no powers to speak of. However, she has retained her intelligence and is able to use her knowledge in science to make little devices and chemicals to use against anyone who tries to go against her.

Intelligence: While she may not seem like it, Laughlyn is actually a rather intelligent woman, going to school for a masters degree in science. Her thought process may not be the best, and at times she may not make much sense, but she’s not stupid, just crazy.

Exceptional agility, flexibility, endurance, strength and speed: Years of yoga allowed her to become rather flexible and even helped with agility. Along with her years of gymnastics throughout her childhood and teenage years (and causally practicing after high school) she is able to move around exceptionally well during a battle. Don't be misguided by her seeming to be a fumbling fool.

Hand to hand combat: She has had no official training in hand to hand combat but has picked up a couple of moves here and there from YouTube, Instagram and heroes she had fought in the past. She tends to incorporate her gymnastic abilities to her attacks.

Splinter: Laughlyn carries around with her a wooden baseball bat she named Splinter. It's a Marucci CU26 Maple Wood Baseball Bat that her husband once owned. It's stronger than your basic wooden bats and has taken much abuse without fracturing throughout the years.

Hammer Time: Hammer Time is a large wooden mallet she also uses as a weapon. Easy to buy and easy to replace. She normally uses the hammer for more comedic reasons than actual battle, but she wont hesitate to use the mallet on enemies.

Blam-O: Chiappa Rhino 60DS, a gun she stole and carries with her at all times but... what fun is using a gun?

Giggles N Shit: Small pellets infused with Nitrous oxide gas that Laughlyn can use against foes. It's composed of Nitrous Oxide, aka Laughing Gas. This can cause the person exposed to become dizzy, affect judgement, laugh and if a large amount is inhaled, can cause a person to faint.

Shinies: Shinies is what she calls her LED shoes that she wears. The reasoning behind this is so she can see when an area is too dark and doesn't have to worry about holding a flashlight.

Hubba Bubba Gum: She actually keeps bubble gum with her at all times. But there is a reason for it! Chewing gum actually helps her alert during a mission as well as giving stress relief. It can also help with nausea and even help bind things together that may have broken.

Suckers: A lollipop could save your life! Which is why Laughlyn can always be found with one! How? Grasp one in the palm of your hand with the stick pointing up between your fingers as you make a fist. Your lollipop fist is now ready to punch some poor sucker in the eyes or stab the neck or groin region. Best tasting weapon around!

Titanium Escape Ring: This is anything but a normal ring, this one contains a saw and handcuff shim pick combination tool which is completely hidden from view when worn. Located on a finger, its always in the exact area needed to quickly access and deploy, even when handcuffed. The shim can be used to open locked handcuffs, while the saw can cut zip-ties, disposable handcuffs, duct tape, rope, and other non-metallic materials.

Psychic Blocker: Lyn wears a Labradorite necklace after she was attacked by a hero with psych abilities. It is able to protect her from mental attacks on her mind. This also means that illusions do not work on Laughlyn. If someone attempts to attack her mind the stone will give off a blue glow, indicating an attack.

Blast Knuckles: Laughlyn's Blast Knuckles are her 28,000,000 Volt Knuckle Stun Gun. Because sometimes you need an extra spark of inspiration in a battle.

Gravel Bomb: A Gravel Bomb is a pellet filled with the street drug, Flakka, that when activated releases a pale pink smoke. At first it may look like a simple smoke bomb, but the effects of the Gravel Bomb happens quickly. People who inhale the smoke develop several symptoms that can include uncontrollable aggression, excited delirium, nausea and uncontrollable vomiting.

Gas Mask: The Gas Mask is a mask she uses right before using her Gravel Bomb or to use on herself if she feels that toxins are going to be used on her.

Waterproof matches: You never know when you gotta light something up!