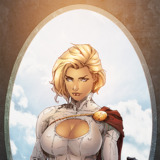 @micro-man: I compelled me to start laughing cuz its so true

Yes, especially since I have a contract with Kellogg, lol

WYC keep a job they were overqualified for just cuz it made hero life easier?

Caitlin presence was a god-send, her ability to just sit there and let Kate spill everything that had been boiling inside of her. She was understanding, patient, and sympathetic, her mere gaze locked onto Kate's soul. After completed her rant, it was now Caitlin's turn, and like a close friend, she verbalized what she knew and what needed to be said.

Kate grew in awe when Caitlin told her when she had been aware of here powers. She had always looked up at Caitlin from afar, but the burden and ability she carried was just so immense to Kate's perspective. Kate locks her grip with Caitlin soft gentle one, as the physical connection furthered the connection they were establishing as was her acknowledgment of Kate's business endeavors. Kate couldn't be happier when Caitlin said she could help. Her words were correct and something Kate had forgotten. She had not gotten to were she was from being a victim, she was a strong, powerful woman, even before her actual strength manifested.

It couldn't have went any better and then Caitlin mentioned someone named Selebrity. Her communication lined opened in conversation, as she was ready to get further answers. If this Selebrity was trusted by Caitlin, then that was could enough for her.

The holographic image of Selebrity was an impressive display. He was the other person she had seen on the television, but the realistic image was even more impressive up close. His posture was quite impressive, even through a communication medium. The way he spoke with his words and tone portrayed confidence, his clothing revealing his status while Kate had some curiosity regarding his availability.

Selebrity had also introduced them to Prime, and informed them about the Mars Mission. She had not known much about it, but it sounded important, as was Selebrity's role in it. And then he expanded his position with people with meta-powers as he quickly invited Kate into its world. It was all going so fast once more as he talked about Alpha Dog and a possible attack. His words caused concern, her still grasp hand firming its hold upon Caitlin's as her eyes showed her concern. Was she read for all this?

Kate nervously rose her hand as a student would to a teacher. Um...Mr Selebrity, do you really think me going into battle is such a good idea. I barely know what Im doing, let alone who I am. It was an abridged version of what Kate had said to Caitlin and also her concern manifesting to the surface once again. I know Caitlin said you can help me, but I dont even have a costume. I could throw something together but it isnt going to be runway level atire for your brand.

Prime's response got her off guard and his response to Selebrity and to them continued to be somewhat stand-offish. The thought of mind-reading was also somewhat questionable. She looked at Caitlin once more. Is all this part of what you were talking about? You think I can handle this?

@paragonxxx: 1- Is there a Selebrity PM I should be in 2- I dont like to make excuses, but I did write it the day I said I would, but explorer ate it and I didnt have the desire to rewrite it, thus the wait until the weekend.

Kate tapped her foot feverishly as her hands grasped her long blonde hair. The revelation that Caitlin Riker had super powers boggled her mind. She needed to talk to her but did not know how. She threw herself back onto the bed in frustration as she could hear a loud boom on her front door.

Leave me alone she huffed, throwing her pillow across the room.

She heard another knock. This one is persistent she thought. This better not be UPS guy wanting to talk to me. Im just not in the mood right now.

Kate made her way to the door, looking through the peep hole at her visitor. Her eyes opened wide as she recognized instantly Caitlin. The excitement got to her as she accidently tore the handle off the frame. She gazed at the results of her strength as the handle now rested in her grasp, bent and destroyed as the door now embodied a new found hole. She knew she would have pouted as she had previously, but the presence of Caitlin made the door irrelevant.

Kate opened the door, her eyes beginning to form tears in front of Caitlin. She wanted to hug her if she allowed it. Embracing someone that would understand her situation was what she needed other than answers. Either way, she would invite her into her home. She would walk in front of her, leading her toward her living room while taking a seat on her couch and gesturing her to do the same.

Kate looked at Caitlin a defeated woman with so many questions. Where do I begin? A flood of questions began to fill her mind as her mouth just as quickly spout them out with no filter. How long have you had powers? Can you help me? What am I? Each question she posed was just as important as the next. Kate wanted answers and Caitlin's appearance at her door had to be fate.

I love parties. Can I come?

@supreme_sapien: @ultra-woman: Im down for it. Let me get a post in with Caitlin and we can merge

Mister Surreal is too detached on purpose, which is fine, as is Reed. If 52 keeps going, I have a feeling Black is going to surpass Arthur as my favorite due to I feel Im reading Cumberbatch's Sherlock