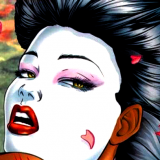 A Change In Face

I’m changing a few aspects of LN. As of recently, I’ve grown bored of her and haven’t been able to produce a post I’m proud of. In light of that, I’m going to change her personality a bit. When she’s fighting she’s as serious as a heart attack and a bit cocky. However, when she’s not Lady Nightmare is a slightly playful person. For her powers, I’m going to make them more magic influenced. Her actual age is going to be 200 instead of 125. She is now an Illusionist. Her other powers and skills still on. History hasn’t changed. That’s it until I remember something else I changed.

Oh yeah I changed her name too but you have to go to meh page to see it. AND when she's in action she has a pale white face mask.

UPDATE:
She will still have telepathy just not as strong as before. Plus changes have been made in the paragraph above.
23 Comments
Load Comments